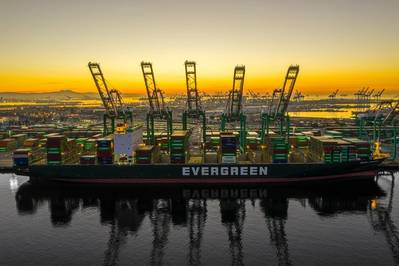 The Port of Los Angeles and cargo shipping lines are diverting some ships to other West Coast ports as a six-month import surge strains capacity at the busiest gateway for ocean trade in the United States.

Container lines such as Hapag Lloyd and CMA CGM are temporarily diverting some sailings to Oakland and other West Coast ports to ease record backlogs at the Port of Los Angeles and the adjacent Port of Long Beach. Sixty-two ships are anchored in San Pedro Bay, with an average wait of eight days to enter the Southern California port complex. Twenty of those vessels are container ships bound for the Port of Los Angeles.

"If we stopped all shipments right now, we still have about a month's worth of work from those ships at anchor," Gene Seroka, executive director of the Port of Los Angeles, said on Wednesday.

"We need to really catch our breath," Seroka said.

Inbound cargo at the Port of Los Angeles has been booming since the summer as U.S. businesses rebuild depleted inventories of refrigerators, recumbent bikes and other goods that are in hot demand as Americans stay home during the coronavirus pandemic.

The sheer volume of containers at the port makes it harder for trucks and trains to quickly whisk goods away from the busiest gateway by volume for U.S. trade with China. The resulting delays are rippling across the global transportation system.

Total volume at the Port of Los Angeles hit 835,516 20-foot equivalent units (TEU) in January, up 3.6% versus the year earlier, port authorities said. Loaded imports, which accounted for more than half of shipments, jumped 5.5%. Loaded exports fell 19.5%, and were outstripped both in number and growth by empty containers as U.S. trade policies and strong dollar depress demand for outgoing goods.