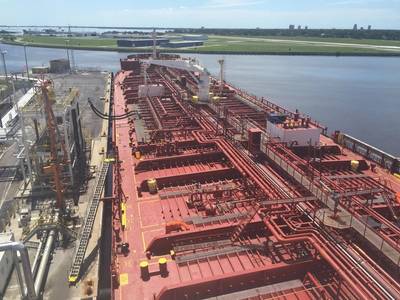 The U.S. government said on Monday it has not yet received requests to waive a 100-year-old law on shipping goods between domestic ports, despite some interested parties who say temporarily lifting the regulation would help energy companies hurt by the oil price plunge.

Kelly Cahalan, a spokesperson at the U.S Customs and Border Protection agency of the Department of Homeland Security, said no requests to waive the Merchant Marine Act, better known as the Jones Act, have been received.

U.S. oil companies are struggling with plummeting prices for crude resulting from the coronavirus pandemic that is crushing demand and a war over market share between major producers Saudi Arabia and Russia.

The Jones Act was implemented in 1920 to support jobs in the maritime industry. It requires goods moved between U.S. ports to be carried by ships built domestically and staffed by U.S. crews.

The American Exploration and Production Council, or AXPC, whose members include independent oil producers, supports a temporary waiver of the Jones Act, that can “allow American producers to move domestic products with greater ease within the U.S.”

The federal government has waived the Jones Act occasionally in the past after hurricanes bashed oil facilities. But the act is championed by shipping interests who say it is necessary for national security, helping to make such temporary waivers rare.

The Trump administration said on Monday it expects Saudi Arabia and Russia later this week to end their dispute over market share and participate in a deal to cut back global oil output by 10% or more.