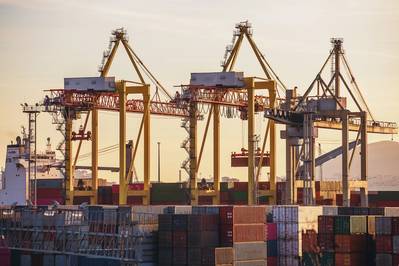 Russia is bracing for a sharp decline in cargo flows and a deficit of containers after major international container shipping lines halted operations in the country due to Moscow’s military campaign in Ukraine, two Russian executives said.

The world’s three largest container shipping lines, Denmark’s Maersk, France’s CMA CGM and Swiss-based MSC, have suspended their bookings to and from Russia after Moscow sent troops into Ukraine on Feb. 24, sparking a flurry of Western sanctions.

The exit of major container shipping companies -- which transport most manufactured goods around the world and are essential to international trade -- is expected to cause a major decline in shipments if no alternatives to these firms are found soon, according to the head of Delo Group, Russia’s largest container operator.

“We expect the drop in shipments (to and from Russian ports) in the northwestern region to be around 90% to 95% starting in May if no alternatives appear on the market,” said Delo Group CEO Dmitry Pankov. He was referring to container terminals at Russian ports including those in St. Petersburg and Ust-Luga.

Delo Group owns Global Ports, which operates terminals in northwestern Russia and in the Russian Far East, as well as terminals in the Black Sea port of Novorossiysk. It also controls TransContainer, the country’s largest freight container operator.

Pankov said ports in the Russian Far East, the Black Sea and Sea of Azov would suffer less from the exit of mayor container shipping companies because their share of cargo traffic was smaller than that of northwestern Russia and because new players in those regions were beginning to emerge.

He did not name those companies, but said some came from Turkey.

Alexander Isurin, chief executive of TransContainer, predicted the exit of container shipping companies would result in a shortage of containers in circulation on the Russian market.

“The market will need to find a replacement for some 300,000 twenty-foot equivalent units (TEU),” said Isurin. TransContainer expects about 30% of containers on the Russian market to be withdrawn from circulation.

“The Russian transport market will most likely not be able to make up for everything and replace the largest container lines in the world that suddenly decided to no longer work here.”

Isurin suggested Russia might have no choice but to work with smaller regional container shipping companies new to the Russian market.

“There are Chinese, Japanese and Korean companies that can choose their position,” he said. “I think that many of them have taken a wait-and-see position that will depend on how the situation develops.”