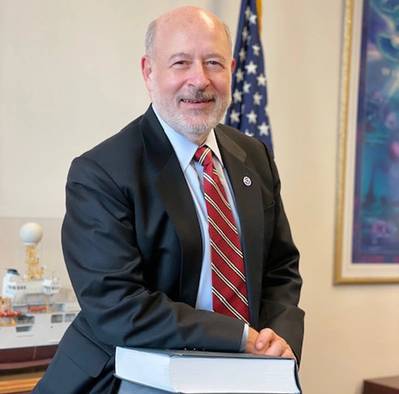 Richard (Rick) W. Spinrad, Ph.D., was sworn in on June 22, 2021 as the Under Secretary of Commerce for Oceans and Atmosphere and the 11th NOAA Administrator. Dr. Spinrad has a long and distinguished career, and he certainly needs no introduction to the MTR audience, or explanation for our rationale in making him our Number One Ocean Influencer of 2021.

I have to start with the workforce, which is 12,000 passionate career professionals scattered all around the world. We map and chart the U.S. EEZ – almost 3.5 million square miles – and we have responsibility for 95,000 miles of coastline. In 2019 our ships cruised for more than a quarter million miles conducting hydrographic survey, fisheries survey and research. We protect species, with responsibility for 164 endangered or threatened species. We have recovered 47 fish stocks in the last decade or so. We protect more than 600,000 square miles of what we could call underwater parks. Our Marine Debris Program has pulled out 22,000 tons of debris since 2006, and that’s all just the ocean side. And then of course, look at our responsibilities in weather: we’re getting about 6.5 billion weather observations and putting out well over a million forecasts to the American public.

Well it’s over 40 years now if you go back to my undergraduate days. But I think about it in the sense that ocean science back when I was an undergrad was really oriented towards getting measurements to the best of our abilities. It was extraordinarily difficult to get measurements. We didn’t have satellites. Going to sea took a lot of effort, but the dollars per bit of data was extraordinarily high, and it was really around pretty fundamental applications. Can we help the shipping industry get a better handle on surface currents? Can we help the fishing industry have a safer working environment?

And what’s changed, in my opinion, is that we’re doing a much better job. We’ve got much more robust observations. We have an Integrated Ocean Observing System. We have more diverse and better data and information to support a much broader set of needs.
And then we also have enhanced computational capability, so we can make forecasts better than we could before. And here’s another real kicker I never would have imagined back when I started in this: Now we’re starting to see this fully coupled integration of ocean science and business. And in fact, some universities now have started what they call Blue MBA programs, where students can go in and get a master’s or PhD in some aspect of ocean science and also a business degree. And that’s one of the things we’re seeing. It’s part of what I call the new blue economy, taking advantage of these observations, of these predictive capabilities, to build out a new economic sector.

One of the most dramatic changes in technology that we are exploiting right now in the ocean world is associated with autonomous or uncrewed systems: underwater, aerial and surface. That ability allows us to have a persistent presence in the ocean. It also gives us a capability for, if you will, adaptive sampling. No longer are we constrained to have the ship running at eight to 10 knots doing a lawnmower pattern in the ocean, only to find that we’ve missed a particular feature because we couldn’t adaptively sample, and we weren’t there. Uncrewed systems allow us to do that. I would also point out these underwater gliders right now are demonstrating an extraordinary capability for acquiring data to improve our forecast of hurricanes, hurricane intensity, to some extent track. But the ability to have a picket line of these as the hurricane is coming through is dramatically improving the quality and the accuracy of our hurricane forecast. If you look at what we’re doing with surface vehicles, we’re now realizing we might be able to complement the traditional approaches to fishery stock assessments using acoustic sensors put on these surface vehicles. In the air, uncrewed aerial systems can collect high-resolution imagery. They can even collect DNA from the breath of a whale to give us some sense of the health of that particular animal. So in any part of the environment, above the water or on the surface or underneath the surface, these uncrewed systems are truly proving to be a force multiplier. 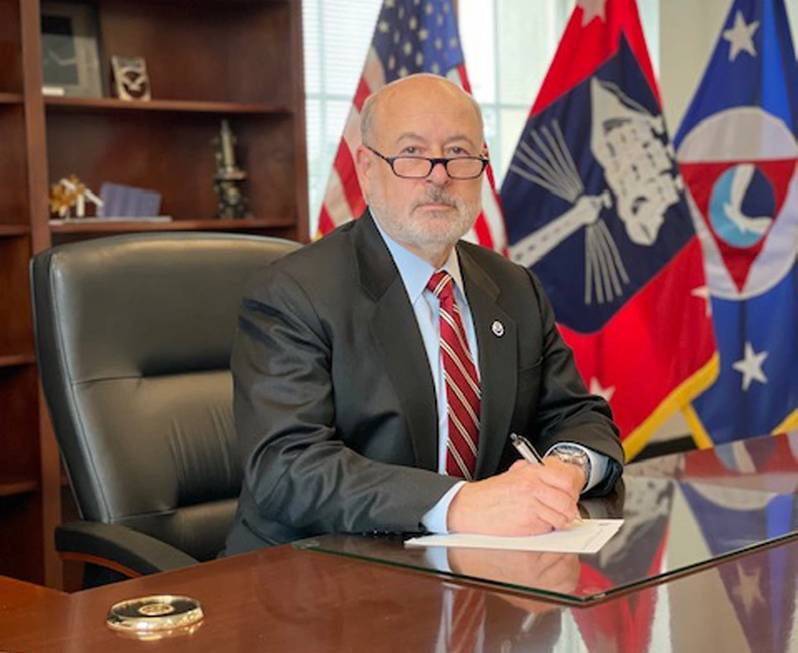 “I believe that we are going to see an explosion of the use of swarmed uncrewed vessels, uncrewed systems that are using artificial intelligence applications to determine how to deploy, how to swarm, where to go, when to sample, how to sample and when to send data back.”  Rick Spinrad, NOAA Administrator. Image courtesy NOAA

Uncrewed systems are being used for an extraordinary array of applications. I mentioned the application of complementing our stock assessments. But the idea of uncrewed systems initially being developed to address the 3 Ds, dull, dirty, and dangerous. I would add now another D: ‘difficult.’ It’s difficult to conduct missions in the high Arctic at certain times of the year or in the Southern ocean, and we now know that we can use uncrewed surface vehicles to do exactly that. So if you think about all of the potential applications associated with fisheries, with general oceanography, with endangered species, with marine debris, all of these missions can be complemented, if not completely addressed, through the use of uncrewed systems.

What I think we’re going to see in the future is some dramatic enhancements and increases of using these platforms for things like mapping. That’s a tough challenge with all of the 3.5 million square miles we’ve got just in the U.S. EEZ and our commitment under Seabed 2030 to completely map and chart our EEZ by the year 2030. We are going to have to do that with the traditional approaches, but also with the exploitation of uncrewed systems.

We’re also going to see uncrewed systems used as data relays, I think, much more aggressively than we have in the past. In fact, I remember years ago talking about whether we could start getting rid of the open-ocean buoys that we have relied on for years and years as data receivers and transmitters. An open-ocean buoy is an expensive, difficult thing to deploy and maintain. Perhaps you don’t need to have that catenary mooring going 4,000 meters down. Perhaps you could use a surface vehicle that is station-keeping to acquire the data, transmit it, and also receive instructions for tasking what could be resident systems.

I also believe that we are going to see an explosion of use of swarmed uncrewed vessels, uncrewed systems that are using artificial intelligence applications to determine how to deploy, how to swarm, where to go, when to sample, how to sample, when to send data back, when to ask for new instructions. So I’m really excited about the potential application of AI, ML to the use of uncrewed systems and the potential for downstream resident systems of uncrewed, underwater vehicles ready to respond to the needs at a moment’s notice.

NOAA is positioned to be seen as the authoritative source for climate information products and services. That’s priority one. Demonstrate that. Don’t simply say we think we ought to have it. But through our actions, through our programs, through our engagement, through our solicitation of requirements, demonstrate that we are the authoritative source of climate products and services.
The second element is integrating equity into our internal and external operations, equity in terms of ensuring that our products and services are provided to all communities, but a special focus on those most vulnerable communities. Internally, we need to take a big leap in diversifying the workforce at NOAA, so we’re undertaking a number of workforce development activities to make sure we are representative of the public whom we serve.

And the third priority, which I think will really resonate with a lot of your audience and leadership, is advancing what I call the new Blue Economy. That is to say the economy that’s based on data, information, and knowledge about the ocean, supporting some aspects of the traditional blue economy, but also supporting other emerging sectors, like public health, for example, and the reinsurance and insurance industries. So we can make possible this new blue economy because of the advances we’ve made in ocean observations and ocean prediction.

I would have to say, coarsely defined, miniaturization. In terms of platforms, for example, I worked for Navy for many years in my career, and I remember one of the original autonomous underwater vehicles the Navy operated was powered with somewhere between 5,000 and 10,000 D cells. It had a lot of functions to do. But miniaturization of the platform now. If you look at all of the commercial developers of uncrewed, underwater vehicles, they’re remarkably small, nimble, and powerful.
Look at the sensors, what we’ve done. Early in my career, I was the president of Sea Tech Incorporated. We developed the fluorometer. The original fluorometers were about the size of a 30-gallon garbage can, and now they’re more the size of a D cell battery. Look at what we’ve done with dissolved oxygen sensors. Look at eDNA. For crying out loud, we can do virtually real-time analyses of the DNA content in the ocean using a relatively small sensor package that sits on an underwater or an uncrewed underwater vehicle. And then onboard processing is the last part of that. The ability to power, collect data, transmit data can be done with a lot less real estate.

Well, the first bit of advice I have is go to sea. I worked for an admiral once who said, “Let’s make sure we don’t all turn into cubicle scientists or cubicle technologists.” You do need the experience. You do need to understand the environment. You actually need to understand how difficult it is to collect information about the ocean. And so I would say go to sea, whether it’s going out on a two-week cruise with your academic institution or participating in some experiments with non-governmental organizations or even doing one of the seagoing camps or summers at sea, that kind of thing. Go to sea.
The second thing I’d say is get out of your comfort zone. I would suggest if you’re oriented toward physics, for example, study a little biology. If you’re a biologist, study economics. Take some coursework out of your straight-line trajectory in a particular field. You will find that because Earth’s systems are inherently transdisciplinary, it’ll pay off enormously if you have some diversity in your educational experience.
Then the last thing I’d say, a lot of people say, “Well, get a good mentor.” I actually think the message is find three mentors, because you’re going to find that the lens that each mentor looks through in terms of their experiences, their advice, each one is going to be fundamentally different. And if you can find... It doesn’t have to be three, but two or three or four people whom you respect, people who will take some time to work with you, advise you, guide you over a relatively long period of time, you will find a real richness in that experience. So go to sea, get outside your comfort zone, and find three mentors would be the advice I’d give young people.