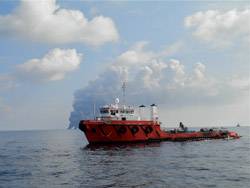 RESOLVE Marine Group reports that its vessel RESOLVE Pioneer, the company’s flagship, has been stationed in Key West, Fla.

Resolve Pioneer is an AHTS, a multi-service vessel with ice class hull and 80-ton bollard pull, stationed in Key West for an indefinite period -- for emergency response and salvage standby for tanker and other commercial vessel casualties in the Gulf of Mexico, the Caribbean and the U.S. east coast. The Pioneer had recently been deployed to support skimming operations throughout the Gulf of Mexico (GOM), arriving shortly after the Deepwater Horizon rig explosion to lend assistance with the firefighting effort. After the rig sank, the Pioneer was outfitted and engaged in offshore skimming operations throughout the Gulf from April until the fall of 2010. RESOLVE Marine Group managed a fleet of 120 vessels during the GOM clean-up operations.

Since demobilization in the Gulf, the Pioneer was fitted out for enhanced fire-fighting capabilities to satisfy FiFi-1 requirements. Two specially designed through-hull suction wells were installed to support the vessel’s on-deck firefighting equipment. The unique 16-in. diameter well design delivers proper flow to the vessel’s fire pumps even while underway or operating in a seaway, something difficult to achieve with typical, temporary “hose over the side” installations. The wells provide each of the vessel’s 14-in. fire pumps with over 5,200 GPM of flow.

The Pioneer is standing ready in Key West to respond to any commercial tanker, container, or bulk cargo vessel or cruise ship that might have an emergency such as a grounding, oil spill, shipboard explosion or fire, or otherwise threaten the sensitive Keys, Caribbean, Gulf or Atlantic marine ecosystems. It is unusual for a salvage company to pre-position a vessel like the Resolve Pioneer for “dedicated salvage” standby, with no other service retainers or assignments. The strategic positioning of the Pioneer in Key West is part of RESOLVE’s commitment to provide salvage and marine firefighting coverage in all U.S. waters. The Pioneer is just one of the RESOLVE fleet of emergency response vessels that are standing by for rapid deployment in the event of maritime casualties in U.S. waters. RESOLVE has floating assets, equipment depots, and a network of emergency response providers in all major U.S. ports and COTP zones to meet the U.S. Coast Guard’s (USCG) new requirements for Salvage and Marine Firefighting response for tanker vessels. RESOLVE meets all salvage and marine firefighting requirements for Vessel Response Plans (VRP), for full compliance with the newly amended Oil Pollution Act of 1990 (OPA90 ) regulations. The revised USCG OPA90 regulations, with more stringent requirements for oil tanker vessels trading in U.S. waters, are effective February 22, 2011. By that date, tanker vessels that trade in U.S. waters will be required to name RESOLVE or another salvage and marine firefighting company in their Vessel Response Plans to comply with the new regulations. The OPA90 regulations were designed to prevent marine casualties like the Exxon Valdez from occurring, by having emergency responders and equipment standing by for immediate deployment in all U.S. waters.