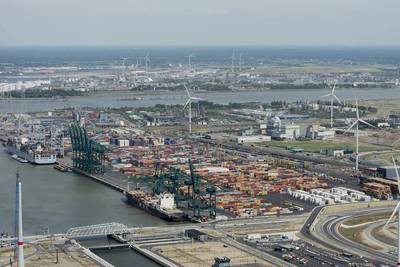 The loan was fully underwritten by Citigroup and Deutsche Bank, and went out to a wider group of DP World’s relationship banks in senior syndication, which closed at the end of last week, one of the bankers said.

“Senior syndication was almost done by the time world markets went into turmoil and senior closed with unchanged terms,” said the first banker.

The question now is how the deal will be received in general syndication.

“I don’t think general syndication will be as successful now as initially contemplated,” the first banker said.

“They will still get the support of the major relationship banks who wanted to join in senior but couldn’t reach the ticket sizes required. But for non-relationship banks struggling in this market it is no longer a possibility.”

This will cause a problem for some banks that joined senior syndication with the expectation of a significant scale back after general.

“Those who committed $800m with the expectation of scaleback to $600m will be fine, but some banks hoped to be scaled back as much as possible – down to $100m in some cases. That possibility has gone,” the first banker said.

Pricing in general syndication could also pose a problem for some lenders, with banks’ cost of funds changing on a daily basis, with the likelihood that it will have increased again by the time the loan cashes up.

“Pricing will be affected, it’s hard to say how to do it,” said a third banker.

However, the expectation is that the deal will be syndicated, even with a delay: “It’s not going to cause major problems. The markets will not be like this forever, we can do the sell down at a later date,” the first banker said.

DP World could not be immediately reached for comment.

The loan, which comprises three acquisition finance facilities with tenors of up to three years, as well as a $3bn five-year term loan, was launched in February.

It followed the announcement by Dubai that one of its state companies, Port and Free Zone World, part of state investment vehicle Dubai World, will buy publicly listed shares of DP World in a deal with a $13.9bn valuation.

Dubai World agreed an historic $25bn debt restructuring in 2011 after Dubai was hit by the global financial crisis.

The new debt includes $2.7bn for the purchase of the listed shares and the refinancing of some debt maturities. DP World will use $5.15bn to fund a dividend to Dubai World, the sole shareholder of PFZW, to repay, at par, all remaining debt it owes to commercial banks following the debt restructuring.