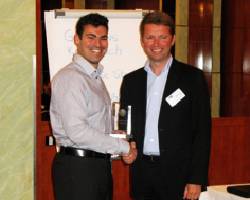 5. May. 2011 | [Group,Maritime] | Hamburg/Germany - Denis Morais is the winner of this year's GL COMPIT Award. At the COMPIT Conference taking place this week in Berlin, the Canadian IT expert was honoured for his contributions to promote frontier technologies in shipbuilding. The award is sponsored by classification society Germanischer Lloyd (GL).

The jury singled out Denis Morais among several highly qualified candidates because his paper combined profound insight into business particularities of the maritime industries with an impressive scope of IT techniques as applied in other industries, written to make it easily accessible for a wider audience. The paper titled "Driving the Adoption of Cutting Edge Technology in Shipbuilding" explores possibilities of how advanced technologies such as Laser Scanning, Digital Prototyping and Shop Floor 3D could become more widely used, efficient and cost-saving assets for the shipping industry. For the fourth time, a young scientist was elected to receive the COMPIT Award at this prestigious conference.

The Canadian Denis Morais is the Product Development Manager for ShipConstructor Software Inc. (SSI), a company that integrates shipbuilding capability with AutoCAD and Microsoft SQL Server. He has made several presentations on CAD technology to participants in the US Navy-funded National Shipbuilding Research Program as well as presented at Autodesk University. Previously, Morais worked in various departments gaining extensive experience using the Autodesk ObjectARX API and the .NET framework to develop applications for the production engineering of ships' hull forms, piping and structure. He has a Computer Technology Diploma from Red River College and a BSc. Computer Engineering from the University of Victoria. He lives in Victoria, British Columbia, Canada.

COMPIT is the abbreviation for "Computer Applications and Information Technology in the Maritime Industries". The conference, that took place for the tenth time and was attended by more than 90 experts from around the world, offered information on advanced IT applications for the ship life cycle. Principal topics were "Virtual Reality," "Electronic Data Exchange," and "Web Technology".