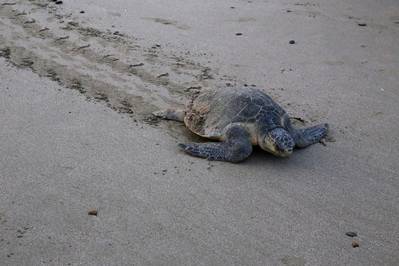 Each year Christian Ndombe and other park rangers scour the beaches of Democratic Republic of Congo's vanishing coastline for turtle nests, bringing the eggs to a hatching center where they are incubated for eight weeks.

Rising sea levels and erosion have consumed almost a quarter of the turtle's nesting grounds, the rangers estimate.

Now a new concern is emerging in the form of a port, which the government says will bring jobs and lower the cost of imports, but that rangers worry will further endanger them.

"The problem we have at the moment is that to really protect them, we need to protect the coast," Ndombe said after releasing hundreds of freshly hatched turtles onto the beach and watching them scramble into the surf.

On a sandy spit a few kilometers down the coast, where the vast Congo River spews into the Atlantic Ocean, President Felix Tshisekedi laid the foundation stone for the $1.2 billion deep-water port on January 31.

On completion in 2025, Banana Port will be able to handle almost half a million containers per year, according to the developer, Dubai's port giant DP World.

The nearby town of Moanda was abuzz with excitement about the project, which will transform the sleepy backwater into an international trade hub.

Congo's main port at Matadi, which lies around 120 km (75 miles) upstream from Banana, is not deep enough to handle the larger vessels from Asia and Europe, requiring cargo to be transferred to smaller ships at neighboring Congo Republic's Pointe Noire port.

The cost of sending goods from China to Congo's capital Kinshasa via Banana Port instead "would result in a saving of 21%", according to a 2017 feasibility study by Dutch engineering consultancy Royal HaskoningDHV.

"Banana Port will be a modern, world class port and undoubtedly a game changer for the DRC," Sultan Ahmed bin Sulayem, CEO of DP World, said at the stone-laying ceremony.

Nature reserve
Casting his net into a lagoon, fisherman Alexander Ngoma Chasa said he was looking forward to buying cheap goods and getting a job. But he worries about the turtles and his catch.

Banana Port will be built close to the perimeter of Congo's Mangrove Marine Park, an nature reserve protected by national and international regulations.

The park contains a variety of vulnerable or endangered plant and animal species, including four species of turtles, manatees and mudskippers.

It is unclear how much of the mangrove forest will be cut down to make way for the port, if any, or the impact of super-tanker traffic because DP World has not published its environmental and social impact assessment.

DP World and the government of Congo did not respond to repeated requests for comment from Reuters. DP World's website says its "sustainability strategy guides our approach".

"It helps us to work in a responsible way that prioritizes sustainability and impact on the people, communities and environment in which we operate," it says.

Authorities at the Congolese Institute for Nature Conservation (ICCN), the government agency that manages Congo's national parks through its rangers, said its experts were not properly consulted by the developers.

"As far as I know there is no study about the environmental and social impact. We need to see these studies. Until now we don't have them," said Olivier Mushiete, the head of the ICCN.

DP World this month told Britain's Guardian newspaper it had submitted an initial environment and social impact study to the Congolese Environment Agency, which issued DP World an environmental certificate.

"We will conduct a further detailed environmental impact study before construction starts," it was quoted as saying.