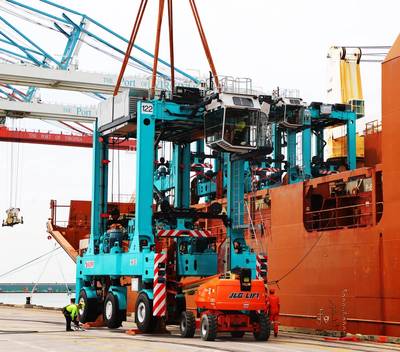 Kalmar, part of Cargotec, will supply 11 Kalmar Hybrid Shuttle Carriers to The Port of Virginia, a deepwater port in the U.S. East Coast.

All of the new units will be delivered to Virginia International Gateway (VIG), one of the port’s primary container terminals and is capable of handling the biggest vessels in the Atlantic trade, with deliveries scheduled to be completed in Q3 2023.

A next step in the Port’s commitment to net-zero carbon emissions by 2040, the new units will directly replace the Kalmar diesel-hydraulic shuttle carriers that were delivered during the terminal's grand opening in 2007.

Kalmar also provides the port with support and servicing through a local team of technicians and local parts inventory.

Rich Ceci, Sr. Vice President of Technology and Projects, Port of Virginia, said, “The Port of Virginia has already surpassed a 32% reduction in CO2 emissions since 2017, which is largely due to the long term strategic decision to transition the shuttle carrier fleet to Kalmar hybrids. We are pleased with Kalmar’s continued commitment to delivering on-time quality products to us. Their local support team continues to work together with our management and ILA-partners to keep things moving consistently.”

Troy Thompson, Vice President, Sales, Kalmar Americas, said, “We are all faced with challenging times. Our customers, our suppliers and our factories continue to be burdened with shortages. However, we have remained steadfast in our journey and committed to our deliveries. We continue to invest in our local resources to be the world’s best intelligent horizontal transport supplier. Our hybrid straddle/shuttle carrier fleet has now surpassed some 250 units just in the USA, largely due to the partnership with The Port of Virginia.”