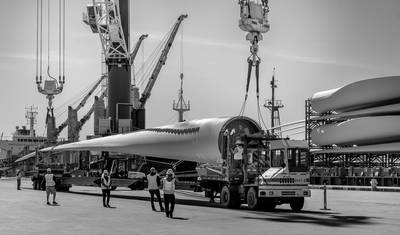 2020 was a year unlike any other for maritime and ports businesses globally. It was also a record-breaker for the Port of Vancouver USA, which reported the highest returns in its 108-year history: revenues totaling $50 million—a 15% increase from the previous year.

The port said it moved over seven million metric tons of commodities, led primarily by energy infrastructure components. In total, more than 2,700 wind turbines crossed the port's docks, the most of any West Coast port and enough to power 112,000 homes.

In 2020, the pandemic disrupted many businesses but the Port of Vancouver’s proficiency in bulk and break bulk cargoes allowed the port to leverage its best assets, including the ability to handle large-sized shipments, such as wind energy components. This advantage, along with extensive laydown space for storage, a highly-skilled workforce and excellent transportation connections, equipped the port to weather the economic disruption, the ort said.

“Strategic investments, long term customer partnerships and a diverse product mix positioned the port well to continue serve as an economic engine for our community during some very difficult times,” said Alex Strogen, Chief Commercial Officer with the Port of Vancouver.

In addition to wind energy components, the port moved more than 5.4 million metric tons of grain, more than 300,000 metric tons of copper concentrate and nearly 90,000 automobiles, with a record number of 3,350 autos received on a single vessel in October. Additionally, more than 450,000 labor hours were recorded by local ILWU Longshore workers, whose wages added millions of dollars into the local economy.

“As we look ahead in 2021, we continue to see opportunity for the further diversification of products handled by the port. Our role as an economic engine for our community continues to grow regardless of the challenges faced,” Strogen said.