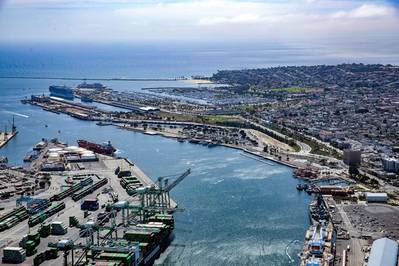 The Port of Los Angeles has taken its first step in the environmental review process for the West Harbor Modification Project on the LA Waterfront with the release of an Initial Study/Notice of Preparation (IS/NOP).

The proposed West Harbor Modification Project involves development of an approximately 108,000-square foot outdoor amphitheater as well as an entertainment venue on approximately 2.5 acres in the southern portion of the former San Pedro Public Market Project site (now called West Harbor). The amphitheater would provide up to 6,200 seats and would host approximately 100 paid events per year, generally from April through November. The venue also could host smaller, local community, nonprofit and sponsored events year-round.

Available for review on the Port of Los Angeles website, the IS/NOP is intended to solicit feedback, which helps to identify any potential environmental impacts and suggest possible alternatives for the project that can be incorporated into the Environmental Impact Report (EIR).

The Port is accepting written comments, and it will hold a virtual scoping meeting via Zoom to receive comments on the IS/NOP on Tuesday, May 3, at 5 p.m. No registration is required. Simultaneous Spanish translation services will be provided. Please use this link to join the meeting.

Written comments on the IS/NOP may be submitted via email to ceqacomments@portla.org or to the following address during the public comment period through Monday, May 16, 2022: