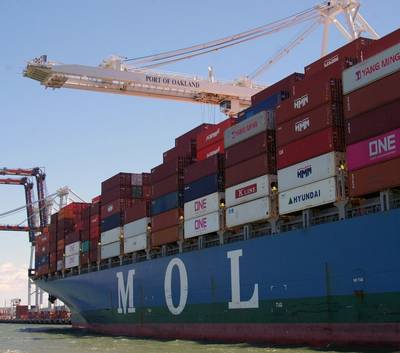 Containerized, loaded import cargo volume hit a new record at the Port of Oakland in 2021. The port on Thursday reported that it handled the equivalent of 1.05 million 20-foot import containers in 2021, the most in Oakland’s 94-year history and 6% above 2020 totals.

One number in the port’s year-end cargo report underscored the dichotomy in supply chain impact. Oakland reported that 55% of its 2021 cargo loads were imports; only 45% were exports. Historically, Oakland’s business split 50/50.

Oakland said it’s collaborating with shipping lines to restore vessel services suspended in 2021. Some carriers skipped Oakland because of crippling delays at Southern California ports, the port explained. Services began returning by the fourth quarter, the port said. It added that it’s lobbying to recoup the remainder this year. According to the port, more vessel calls would mean greater opportunity for exporters to reach overseas markets.