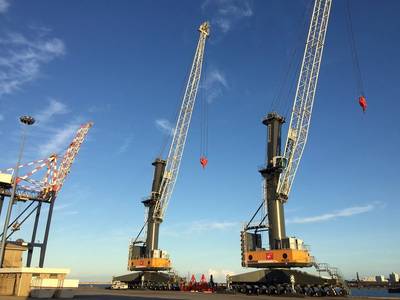 The two LHM 600 were transported from Rostock, Germany to South Africa. After a 20-day journey, they were unloaded from the transport vessel “Happy Dragon”.

Transnet Port Terminal’s Acting Chief Executive, Michelle Phillips said, “Having lost an entire crane due to gale force winds really set us back. The arrival of these two modern cranes will ensure that our promise to the industry is realized”. She added that the cranes arrived at a critical time when the company's nationwide terminals were giving priority to the movement of much needed goods in the Eastern Cape, South Africa and abroad.

Modern and highly efficient, the two Liebherr mobile harbor cranes, type LHM 600, have multi use capability, can lift up to 104 tons and move up and down the quayside according to berth activity. They are designed for versatile and efficient cargo handling. “An operator simulator has been onsite for the past month with Liebherr providing training to our employees. The LiSIM training simulator was part of our purchase arrangement – and we are quite impressed with the improved skills our employees are demonstrating,” said Phillips.

The Port Elizabeth Terminal has been in operation since 1963. It's one of the largest exporters of manganese in the country. It is also an automotive hub for the Eastern Cape Region. Both Liebherr mobile harbor cranes are multi purpose machines. They’re also expected to benefit the automotive and the agricultural bulk sectors at the terminal. Due to their outstanding mobility they can move up and down the quayside according to berth activity, which allows them to handle New Panamax container and Capesize bulk vessels alike.

The cranes are part of a large equipment investment and are a response to industry calls for equipment that will improve performance across the operations of Transnet Port.