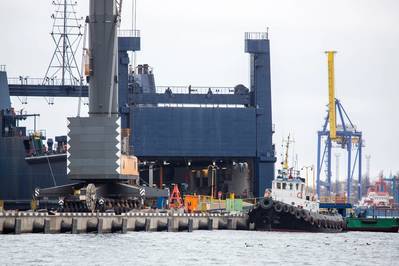 The Diesel Emissions Reduction Act (DERA) funds will cover about 44 dray trucks, commonly used for transporting shipping containers to and from the port, and four pieces of cargo-handling equipment such as forklifts, yard tractors and other heavy cargo machinery.

“This EPA grant will help us continue cleaning the air around the Port of Baltimore,” said Governor Larry Hogan. “Working with our federal partners, the port is showing how to be a responsible steward of the environment and, at the same time, break cargo records, grow business and expand jobs for Marylanders.”

DERA funding is administered by the EPA through its national Clean Diesel Program. It’s estimated that the replacement equipment acquired for the port through the DERA grant will result in a lifetime reduction of emissions output of about 14 tons of particulate matter, 290 tons of nitrogen oxides, 96 tons of carbon monoxide and 15 tons of hydrocarbons.

The federal grant complements the Port’s own Diesel Equipment Upgrade Program, which also focuses on replacement or retrofit of older equipment with newer and more emission-efficient technology. Since launching the program in 2008, the Port has replaced more than 200 dray trucks and 110 pieces of cargo-handling equipment, repowered 10 marine engines and retrofitted 16 locomotive engines. Overall, those upgrades have resulted in reductions of 3,304 tons of nitrogen oxide, 922 tons of carbon monoxide, 165 tons of particulate matter and 141 tons of hydrocarbons.

“Through initiatives like our Diesel Equipment Upgrade Program and EPA’s Clean Diesel Program, we have reduced pollutants in the air around the Port by more than 10,000 tons in the past 12 years,” said David Thomas, acting executive director of the Maryland Department of Transportation Maryland Port Administration (MDOT MPA).

Acting Executive Director Thomas was named to his current post on January 1 following the departure last month of longtime MDOT MPA Executive Director James J. White. Thomas has been with the MDOT MPA for 20 years, including serving as deputy executive director of logistics and port operations since December 2016.