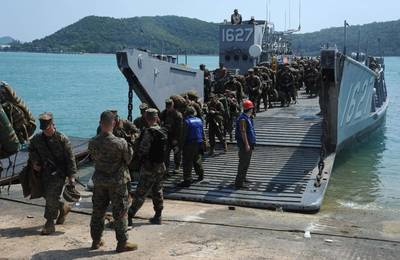 The United States will increase the number of drills it conducts in the Asia-Pacific as part of its new strategy to counter to China’s expansion in the South China Sea, Reuters quoted the Philippine military as saying.

Admiral Harry Harris, commander of the US Pacific Command, discussed the Pentagon’s recently drafted Asia Pacific Maritime Security Strategy with his Filipino counterpart, General Hernando Iriberri, during a visit to Manila, Reuters reported.
The talks outlined Washington’s actions in the disputed South China Sea and East China Sea, focusing on the protection of “freedom of seas,” deterring conflict and coercion, and promoting adherence to international law, according to Colonel Restituto Padilla, a military spokesman.
China claims most of the South China Sea. The Philippines, Vietnam, Malaysia, Taiwan and Brunei also have overlapping claims.
Meanwhile, last week, the Pentagon released a new Asia-Pacific Maritime Security Strategy document outlining the Department's plan for ensuring the freedom of the seas and the broader security of the region.
While the strategy is careful to not exclusively focus on the rise of China, the country's central role in U.S. strategic thinking is hard to miss, and the military touted the report as the "most comprehensive assessment of land reclamation activities in the South China Sea" to date.
The document rejects Chinese sovereignty claims over disputed islands in the South China Sea, asserts that the United States will enhance its "force posture and persistent presence" in the region while "building the capacity' of allies and partners, and explicitely supports India's "Act East" policy as a "strategic convergence" with the U.S. re-balance, embracing India as a "net provider of security in the Indian Ocean region and beyond."
• Asia Pacific • Asia-Pacific • Brunei