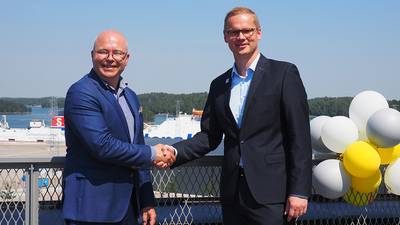 Ports of Stockholm and hydrogen solutions provider CMB.TECH are joining forces in a unique hydrogen collaboration that aims to make Stockholm Norvik Port Sweden’s most climate-smart and sustainable port.

The investment in hydrogen will encompass port operations and will also expand service offerings to shipping companies and haulage firms, as well as other customers and collaboration partners.

A newly built hydrogen fueling station adjacent to the port will offer customers and collaboration partners the possibility to convert to greener fuel.

In the initial phase, port vehicles will be converted to run on green hydrogen, and the first hydrogen-fueled terminal truck is planned to be in operation at Stockholm Norvik Port in 2023.

“Hydrogen will play a crucial role in converting to fossil fuel-free transport, both on land and at sea,” said Anna König Jerlmyr, Mayor of Stockholm. [This partnership] s is entirely aligned with the ambitious environmental goals of Ports of Stockholm for operations to be fossil fuel-free by 2030.”

Alexander Saverys, CEO of CMB.TECH, said, “This is the first port in Sweden we have worked with, and we hope to be able to contribute with our knowledge and experience in converting from diesel to hydrogen. This provides entirely new possibilities to further develop Stockholm Norvik Port as the climate-smart port it already is.”

The MN100 Application Deadline is August 10