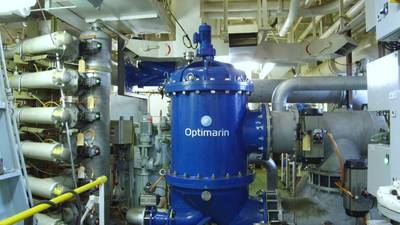 The testing procedures were conducted at the NIVA test facility in Norway from September 2019 to the end of June 2020, with DNV GL operating as the designated Independent Laboratory. Tests were conducted with two different filters simultaneously. In total, 36 tests were run for three salinity conditions (fresh, brackish and marine water), with zero interruption or mechanysal issues recorded. DNV GL is now undertaking final evaluation and documentation of the tests ahead of full regulatory application and completion.

The first company to install a commercial maritime system, in 2000, the Stavanger-headquartered team was also the first to achieve full USCG approval and the first to offer a full five-year parts and servicing guarantee on fleet agreements. The latest move completes testing ahead of IMO’s G8 October deadline to ensure customers meet the most stringent regulatory requirements.

“In a shifting regulatory landscape we wanted to send out a clear message that we are ahead of the curve, satisfying all requirements so owners and operators have a global ‘ticket to trade’, and one less thing to worry about,” said Optimarin CEO, Leiv Kallestad. “Optimarin is a long-term partner for its customers, so we see it as vital that we safeguard their operations as much in the future as we do today.”

In other news, Optimarin notes that the COVID-19 pandemic has had minimal on the organization, with several new fleet agreements signed and “business as usual” for its delivery and service functions.

“It’s obviously been a time of disruption, for the industry and society as a whole, but we’re very satisfied with how the organization has responded,” Kallestad says. “The pandemic doesn’t affect the industry’s need to comply with regulations and safeguard the environment, so it’s gratifying to see the business continue to make such positive headway in 2020.”

Optimarin has now sold around 1,000 of its UV-based systems, with more than 650 installed and operational, of which approximately 40% are retrofits. Customers include names such as Royal Caribbean International, Fednav, GulfMark, Hapag Lloyd, Matson Navigation, McDermott, the Danish Navy, MOL, Seatruck and Technip, among others.