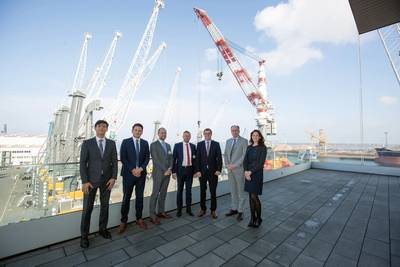 The growth of offshore wind renewable power continues to push investment in marine, port and infrastructure project, the latest an announcement ffrom the Lindø port of Odense which placed an order for an LHM 800 heavy lift unit, a machine with a lifting capacity of up to 308 tonnes at a height of 96.7 meters above quay to cope with the huge offshore wind turbines of the future.

“With the purchase of the new mega crane, LINDØ port of ODENSE is cementing its key role as one of the world's largest port players in the green transition with unique production facilities for the future of the future offshore wind turbines,” said Carsten Aa, CEO at Lindø port of Odense.

Lindø port of Odense is Denmarks largest port by area, comprising 6.4 million sq. m., with expansion planned for 2020. It is located strategically between the North Sea and the Baltic Sea, and in preparing for the growing size of future offshore wind turbines, it agreed to purchase the world's largest port mobile crane from Liebherr in Rostock.

The LHM 800 is equipped with a high-rise tower extension that makes it to the largest and strongest ever built by Liebherr. The built-in electric motor of the LHM 800 is designed to save the port up to 300 tons of CO2 emissions per year and makes the crane emission free at the same time as the power is produced by windmills. With the installed 300 metres cable drum, the crane can travel up to 600 metres at the quay.

With the capacity Lindø will be able to lift 400-ton nacelles to offshore wind farms exclusively with mobile cranes, and at the same time, the mega crane offers good opportunities for maximum use of the new port extension.