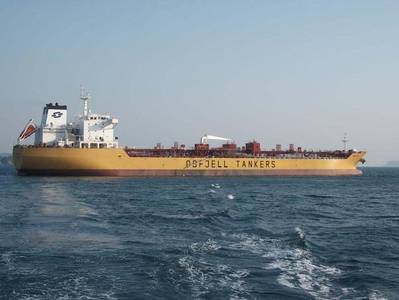 “The defendants violated environmental laws that protect our oceans, the world’s fisheries and marine life, from harmful pollution,” said Acting Assistant Attorney General Dreher. “Today's conviction ensures they will be held accountable with a stiff criminal fine, contribute to conservation efforts in coastal areas of Long Island, and submit to strict monitoring. We hope this sends a strong message to the shipping industry that committing environmental crimes at sea will not be tolerated.”

“Pollution of our waters will not be tolerated,” said U.S. Attorney Daly. “Shipping companies are on notice that violating American environment laws will result in federal prosecution and puts at risk their business interests in this country. Crew members who ignore these laws may also face incarceration. Although these illegal discharges of oily waste occurred in international waters, we are gratified that a quarter of the $1.2 million monetary penalty will fund improvements and protection of the Long Island Sound, a vital economic and recreational resource that contains many unique wildlife habitats.”

“The Coast Guard is committed to working with the maritime industry, and federal, state and local law enforcement partners, to protect the U.S. maritime environment from individuals who pollute our waters,” said Rear Admiral Abel. “When these violations occur, the Coast Guard will work with our partners to ensure that the violators are held accountable under the law.”

According to court documents and statements made in court, Odfjell operated the M/T Bow Lind, a 577-foot, 26,327 gross ton petroleum/chemical tanker ship. On Nov. 6, 2012, the U.S. Coast Guard boarded the vessel in New Haven, Conn., to conduct an inspection. The inspection and subsequent criminal investigation revealed that three times between October 2011 and October 2012, while in international waters, the vessel discharged machinery space bilge water directly into the sea. At the direction of senior engineer Ramil Leuterio, crew members bypassed pollution prevention equipment that was in place to ensure that any discharged bilge water contain less than 15 parts per million of oil. The crew then concealed the illegal discharges by making misleading entries and omissions in the vessel’s oil record book.

Under the terms of a binding plea agreement, if accepted by the court, Odfjell will be placed on probation for a period of three years and pay a criminal penalty totaling $1.2 million, including $300,000 that will be directed to The National Fish and Wildlife Foundation to fund projects aimed at the preservation and restoration of the marine environment of Long Island Sound.

As a condition of probation, Odfjell will implement an environmental management plan which will ensure that any ship operated by Odfjell calling on a port of the United States complies with all maritime environmental requirements established under applicable international, flag state, and port state laws. The plan ensures that Odfjell’s employees and the crew of any vessel operated by Odfjell that calls on a United States port are properly trained in preventing maritime pollution. An independent monitor will report to the court regarding Odfjell’s compliance with these obligations during the period of probation.

Leuterio, 42, a citizen of the Philippines, pleaded guilty yesterday to one count of violating APPS for his role in directing lower ranking crewmembers to make the illegal discharges and for failing to accurately maintain the vessel’s oil record book. He faces a maximum term of imprisonment of six years and a fine of up to $250,000.

This case was investigated by the U.S. Coast Guard Sector Long Island Sound, Coast Guard Investigative Service, and Coast Guard office of Investigations and Analysis (CG-INV). The case is being prosecuted by Trial Attorney Stephen Da Ponte in the Environmental Crimes Section of the Environment and Natural Resources Division of the Department of Justice and Assistant U.S. Attorney Paul H. McConnell from the U.S. Attorney's Office for the District of Connecticut.