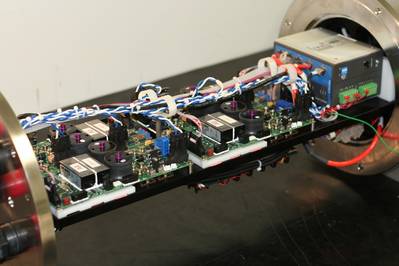 OceanWorks International has produced the SIIM-375, a mini-Node variant of the Subsea Instrument Interface Module (SIIM) for the VENUS observatory.

VENUS, the coastal network of the Ocean Networks Canada (ONC) Observatory, is a cabled undersea laboratory for ocean researchers and explorers. VENUS delivers real time information from seafloor instruments via fibre optic cables to the University of Victoria in British Columbia, Canada. VENUS is one of the 4 Seafloor Networks around the world in which OceanWorks has deployed its world-leading Seafloor Networks technology.

The SIIM-375 provides Node-like functionality for deployments on extension cables, significantly extending the capabilities of the observatory. Power to loads is controlled by four Oceanworks 3rd generation 375VDC breakers. This allows up-to four regular SIIMs to be powered from the SIIM-375, increasing the available instrument density three fold at the measurement site.

The SIIM-375 compliments the 15 SIIMs delivered to VENUS by providing greater instrument port capacity in areas of interest, up-to 10 kilometres from the Primary Node. The SIIM-375 is designed to be highly reliable. The electronics package was sized to fit in a standard SIIM pressure vessel, reducing program risk and cost.

“OceanWorks is very pleased to have again been involved in the continued growth and expansion of the VENUS ocean observatory . The ground breaking science made possible by ONC and the VENUS system has benefited scientists and oceanographers the world-over, and will continue to do so throughout the system’s long lifetime,” said Adam Lesinski, the General Manager at OceanWorks International Canadian Operation.

OceanWorks is an internationally recognized subsea technology company specializing in the design and manufacture of manned / unmanned subsea systems and specialized equipment for military, oil and gas, scientific, and other marine markets.