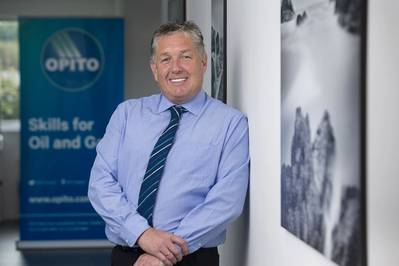 OPITO, a global oil and gas industry skills, standards and workforce development organization, is deeply saddened to confirm the death of its chief executive David Doig.
Mr Doig, 57, who was based in Dubai, suffered a heart attack on December 31st and later passed away peacefully in hospital in Fife, Scotland.
John Taylor, chairman of OPITO, said: “David was a vocal champion of OPITO, a much-respected industry leader, a firm advocate of social responsibility; and a trusted colleague and friend to many.
“His straight-talking approach, determination and passionate belief that all oil and gas workers regardless of their job role, their employer or their nationality should be able to travel to work and return home safely at the end of the day, helped drive positive change in countless countries around the world and inspired great loyalty among those who knew him.
“His loss is sorely felt by us all. Our thoughts are with David’s wife, Gillian, and his family at this difficult time.”
Born and raised in St Andrews, Scotland, David was educated at Madras College and remained intensely proud of his Fife roots throughout his life. With an early background in engineering, he worked on major offshore projects in the North Sea for more than 25 years before moving onshore in 1994 to lead on maintenance support contracts as a business unit operations manager with KBR.
He joined OPITO’s in 1999 as head of the audit team and worked steadily to broaden his knowledge and experience, including returning to education to complete an MBA with the Open University.
David was appointed chief executive in spring 2005, then Group CEO following the creation of OPITO International in 2009 where he forged new relationships and advised governments, NOCs, IOCs and contractors on workforce development strategies.
David was a strong supporter of the oil and gas industry, a committed advocate of lifelong learning and an ardent supporter of initiatives that provide opportunities for people to gain new skills. Under his leadership, OPITO supported initiatives to both attract people to the industry and empower people around the world, including a transformational international higher education programme with the Open University and life changing schemes in Africa and India to address the chronic shortage of teachers and increase pathways into education for women.
As the organization grew, he relocated to the United Arab Emirates, over-seeing growth into new markets and the establishment of OPITO’s first overseas offices in Dubai, Kuala Lumpur, Houston and Cyprus.
He was also a driver for change when it came to opening doors for young people and was a champion of the UK oil and gas industry’s modern apprenticeship scheme since its launch in 1999, working with employers and the industry during both good and challenging economic times to ensure that career opportunities continued to exist.
David returned to Scotland as often as he could. A St Andrews lad at heart, he’ll be remembered by many for his love of life, his quick laughter and his mean swing on the golf course.
• Africa • Cyprus • David Doig