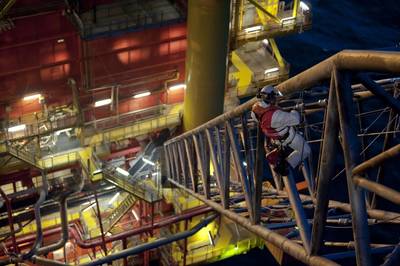 Oil service employees, working for firms such as Schlumberger, Halliburton, Aker Solutions and Baker Hughes, now have until the end of Thursday to reach a deal, otherwise talks would go to a government mediator before possible labor action.

Platform workers staged a 16-day strike two years ago, cutting oil production by 13 percent before the government intervened to impose a deal and end the strike. But service workers at the time struck an agreement and did not stop work.

Oil firms have sharply reduced spending plans this year, arguing that the sector has lost much of its competitiveness due to a decade worth of rapid wage growth and unions now needed to exercise self restraint.

"If the sides can not reach agreement through negotiation, the dispute goes to mediation with the risk of strikes at the companies involved," labor union Indusri Energi, which represents 6,700 workers, said.

The sides did not release specific demands but said talks would involve wages, overtime and various other supplements.

Industri Energi, the biggest of the energy unions, reached a wage deal for platform workers last week but the smaller SAFE and Lederne unions held out, demanding better pensions.

Mediation in those talks has not yet been scheduled but would likely take place in late May or early June, union officials said.