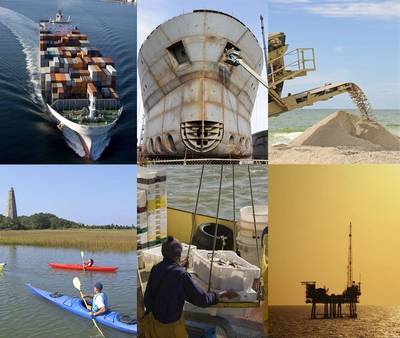 In 2011, the U.S. ocean and Great Lakes economy produced $282 billion in goods and services and employed 2.2 percent of the nation’s workers—that’s more than twice the percentage of workers in the U.S. agriculture industry. This fact and many others are featured in a 2011 data summary from Economics: National Ocean Watch (ENOW), a product of the National Oceanic and Atmospheric Administration (NOAA) Coastal Services Center.

County-level facts, charts and maps highlighting the 2011 data findings are found on the “Ocean Jobs” and “Wetland Benefits” tabs of the Coastal County Snapshots tool.

“A wide variety of U.S. industries and communities depend on the resources of the oceans and Great Lakes,” said Jeffery Adkins, an economist with the center. “ENOW data can help communities stay vital and resilient by highlighting their economic strengths and vulnerabilities, including those that could be affected by ecosystem changes, extreme weather events or sea level rise.”

The success story of the 2011 ocean and Great Lakes economy has hundreds of important chapters, and here are just a few:

Data Uses
“This is great data to help remind people that we rely on our environment and that we need to nurture it and take care of it, and grow our industry around our coastal waters,” said Harrison P. Bresee, a product user and economic planner for the Middle Peninsula Planning District Commission in Saluda, Virginia.

“ENOW provided a good basic snapshot for us to use to further the conversation with stakeholders, the public, and resource managers,” said Jennifer Hennessy, an ocean policy lead for the Washington State Department of Ecology who is developing an ocean economy report. “It provides a really solid foundation for us to identify further data gaps and inform future studies.”

ENOW data and tools have been used in many other ways—for instance, to develop baseline economic profiles for 70 East Coast communities and to plan for coastal hazards in Florida.

Additional products include the ENOW Explorer, which allows users to interact with data and trends, and a new video in the series, Econ 120: Two Minutes of Economic Sense.

The ENOW product line is part of the Digital Coast initiative led by the NOAA Coastal Services Center. The center works to protect coastal resources and keep communities safe from coastal hazards by providing data, tools, training, and technical assistance.