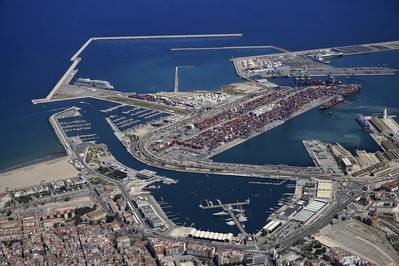 The Port of València is getting closer to electrifying its docks so that the ships that dock there will produce zero emissions during their stay.

The Port Authority of Valencia (PAV) announced on Wednesday that it awarded the construction of the electrical substation to the company Cobra Instalaciones y Servicios for €5.1 million and a completion period of 24 months; the connection to supply 132 kV voltage to the new substation for €2.3 million euros to the company Eiffage Energía, with a completion period of 8 months; and the site management and health and safety coordination to Gesman-Coseltel for more than €400,000. The substation will make it possible for ships to connect to the general electricity grid once they are docked at the quay, using clean energy. This will eliminate thousands of tonnes of greenhouse gases per year and significantly reduce emissions of other particulates.

The project involves the installation - in two stages - of two transformers with a total apparent power of 60 Mega Voltamperes (30 MVA each), which will reduce the voltage received at 132 kV (132,000 volts, or 132 Kilo Volts) to 20 kV (20,000 volts, or 20 Kilo Volts), as a preliminary step in order to deliver this voltage to the different points of the APV's installations. These include the terminal docks to facilitate the connection of ships to the grid. In addition, this infrastructure will guarantee significant reductions in emissions and operational costs for ships calling at the port of València.

The new electrical substation is supported by the European Commission through the Connecting Europe Facility (CEF) Committee which is funding the project EALINGWorks Valenciaport: Preparation of the electrical grid of the Port of Valencia for Onshore Powel Supply, to prepare the port's electrical grid for the supply of OPS to container ships, ferries and cruise ships at the new terminals of the Port of València.

Valenciaport is making progress in the Spanish Government's commitment to achieve 100% electrification of the ports by 2030. An objective which, in the case of Valenciaport, goes even further to move from an eco-efficient port to a completely green port by 2030.

To this end, in addition to the electrification of the quays, projects such as the use of hydrogen in the port installations, the implementation of photovoltaic panels or the use of wind turbines to obtain electrical energy are being carried out. This commitment is also present in the infrastructures being developed by the PAV, such as the new north container terminal and the passenger terminal, which will be a model of environmental sustainability.