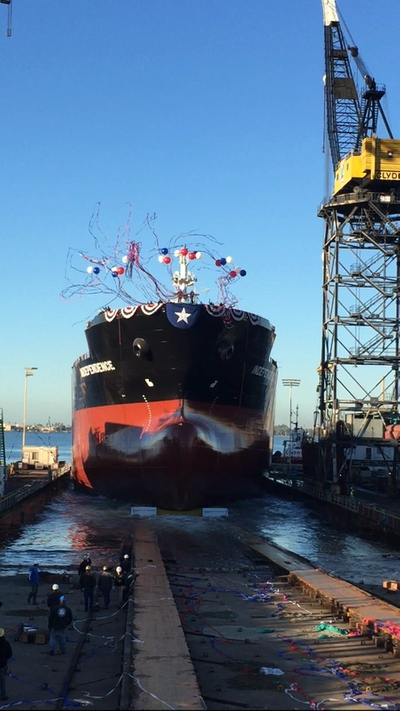 U.S shipbuilder General Dynamics NASSCO launched the first ship in a series of ECO Class tankers for the SEA-Vista fleet at a christening and launch ceremony at the company’s shipyard in San Diego on Saturday, December 12.
The ship, the Independence, is a 610-foot, 50,000 deadweight-ton, and LNG-conversion-ready product tanker with a 330,000 barrel cargo capacity. According to the shipbuilder, the new ECO Class tanker symbolizes the emerging direction of the shipping industry in the U.S. toward cleaner, more fuel-efficient modes of transporting product. Construction on the ship began in November 2014.
As part of the ceremony, the ship’s sponsor, Allison Moran, CEO of RaceTrac Petroleum, christened the ship with a traditional champagne bottle break over the ship’s hull. Jayne Rathburn, former CEO/owner of US Joiner, pulled the trigger to release the ship into the San Diego Bay.
The Independence was built for SEA-Vista, a partnership between SEACOR Holdings Inc. and Avista Capital Partners, and will be operated by Seabulk Tankers, Inc.
• SEACOR Holdings Inc. • United States • San Diego Bay