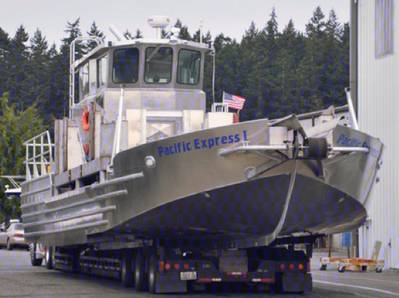 The boat features a stainless steel, hydraulic tilt-deck designed to allow one man to offload 40 tons of oysters in about 45 minutes.  Two similar vessels, the Willapa Express and the W.E. Morris Express use the same tilt-deck system and are presently operated by Coast Seafoods in Willapa Bay, Washington.

Pacific Express 1 launched in April for sea trials out of La Conner, Washington.  It was then hauled out and blocked, prepped and painted.  Capt. Eric Daigneault of Penn Cove Shellfish delivered the vessel to Coast Seafoods in Markham, Washington on April 23rd, making the trip at 12.5 knots under 85% load with a top speed of 15.1 knots.