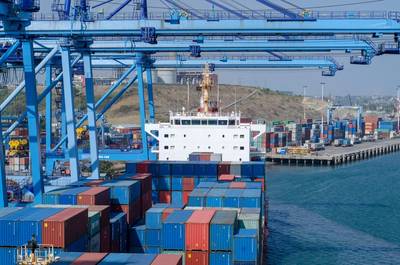 Kenya's port of Mombasa will spend 20 billion shillings ($193 million) to modernize four berths to handle both container cargo and goods not packed in containers, the head of the state port operator said.

The port, built in 1895, is the main trade gateway for the Eastern Africa region, serving Kenya and seven neighbors, including Uganda, Somalia, Rwanda and South Sudan.

The investment is driven by growing demand for imported cargo in the region, where most economies are growing by at least 5% per year, said Daniel Manduku, the managing director of the Kenya Ports Authority (KPA).

Exports make up just 15% of the cargo that goes through Mombasa every year, with a third of the total belonging to neighboring countries, while Kenya, the region's biggest economy, takes up the lion's share.

Annual cargo traffic through the port is projected to jump to 47 million tonnes in 2025 from 32 million tonnes last year, Manduku said in an interview at the port.

"We are currently undertaking major expansion programs... We are trying to be ahead of the game."

The volume of cargo handled is expected to rise to 34 million tonnes this year, including 1.4 million 20-foot containers. Popular imports include clinker for cement manufacturing, steel, fertilizer and grains.

The European Investment Bank and French development agency AFD have offered to finance the modernization of the berths at commercial rates, Manduku said.

"We think it is something we should consider, as opposed to normal commercial bank loans," he said, adding that work will start in mid-2020.

KPA is spending an additional 39 billion shillings to build a new oil terminal, to replace its existing facility that dates back to 1968.

China Communication Construction Co. is the contractor for the project, which will triple the port's annual capacity for oil and liquid gas to 1 million tonnes.

"The demand for liquid oil is high," Manduku said, adding the facility could also help with Kenya's crude oil exports.

Britain's Tullow Oil and partners, including the Kenyan government, are expected to make a final investment decision on crude oil production from fields in the far northern county of Turkana next year.

This includes 55 billion shillings for building three berths at a new port in Lamu on Kenya's northernmost coastline, close to the Somalia border.

Construction is expected to be completed in the next year and 10 foreign firms, including from Singapore and China, have expressed interest in running the new port by leasing it from the government, Manduku said.

"We are thinking of giving it to a private sector player on a concession model," he said.