Modernization of The U.S. Fishing Fleet 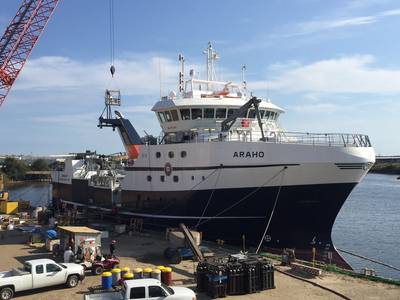 Coming in the January 2017 edition of Maritime Reporter & Engineering News is an insightful report on the modernization of the U.S. Fishing Fleet, with a focus on the ubiquitous Pacific Northwest. Modernization of the North Pacific Fishing Fleet, a study by The McDowell Group for the Port of Seattle, has made the rounds and given weight to the idea that a major fleet upgrade really is underway. With average 2014 gross revenues having run between $2 million for Bering Sea/Aleutian Island trawl vessels to $16 million for some catcher-processors, there’s a feeling that owners can afford new vessels that might cost $15 million for the first group or $130 million for the second.
Despite the big harvests, just one large vessel a year has been built or heavily modified since 2000. That’s about to change. The Study that vessels over 30 years of age are worth about $9 billion in “replacement value” to the supply chain. Those built when the Vietnam War ended, or before, represent $4.4 billion if replaced. “The results of this analysis (of average vessel age) indicate $1.6 billion (or 37 new vessels) in modernization projects will be completed within the next 10 years.
For full details, look for this report in the January 2017 edition of Maritime Reporter & Engineering News.
• Northwest • Port of Seattle • United States