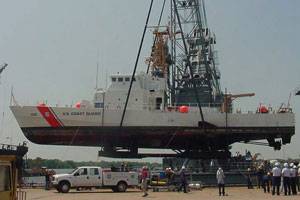 The U.S. Coast Guard reported that Mission the Effectiveness Project (MEP) is significantly improving the mission capability and lowering the operating costs of in-service medium endurance cutters and patrol boats, thus bridging the gap between the aging fleet and the delivery of new assets. Since MEP began in 2005, the project has consistently achieved its goals on time and on budget. As project approaches its midpoint, the Coast Guard reviewed some of the lessons learned and performance improvements achieved.

Under MEP, 20 of the 110-ft Island-class patrol boats, 14 of the 210-ft Reliance-class medium endurance cutters and 13 of the 270-ft Famous-class medium endurance cutters are expected to undergo extended refurbishment at the Coast Guard Yard in Curtis Bay, Md. The project consists of a series of extended shipyard availabilities funded from the Coast Guard’s acquisition, construction and improvement budget.

“MEP was not envisioned as a service life extension project, which would involve more extensive repairs or replacement of items like a ship’s main engines. Instead, MEP’s goal is to increase the mission effectiveness of selected cutters by driving down the number of equipment failures, thus resulting in increased operational availability,” explained MEP Project Manager Ken King.

MEP was designed as the most cost effective way to provide equipment upgrades and structural repairs That will maintain the core mission Effectiveness of selected in-service patrol boats and cutters. By replacing obsolete systems, MEP helps improve the reliability and reduce future maintenance costs for legacy cutters.

“Back in 2003, naval engineers went aboard ships for inspections and determined what systems were causing the most problems and were the most expensive to repair. The prioritized list of engineering changes became the MEP work items,” King noted.

“One of the keys to our success has been doing the work at the Coast Guard Yard. It’s a win-win situation for everyone that allows the Coast Guard and the yard to plan a steady workload. MEP accounts for approximately 70 percent of the yard’s current workload,” King said. “Another key has been the oversight provided by the on-site Legacy Sustainment Support Unit (LSSU), which functions much like a Project Resident Office.” Cmdr. Robert McClure, commanding officer of the 26-person LSSU, explained that MEP provides “triage, i.e. targeted repair, renewal and replacement of low reliability and obsolescent systems and subsystems. The MEP availabilities address critical engineering items needed to keep a ship operational and provide a bridge to asset replacement.”

Refurbishing the 110-ft patrol boats will help bridge the gap until the 153-ft Sentinel-class patrol boats are delivered, while refurbishing the 210-ft and 270-ft medium endurance cutters will help bridge the gap until the Offshore Patrol Cutters are designed and delivered. “We repair and replace what we can to provide the best value to the operators and the public until new ships arrive and relieve these legacy cutters,” McClure said. “While not designed as a service life extension project per se, we anticipate gaining up to 15 years of additional useful life as a result of MEP.”

MEP Work Items & Schedule
There are approximately 100 to 125 MEP work items for each cutter, all of which are considered hull, mechanical and engineering repairs. Some of the many work items include new electrical cables and switchboards; pump and motor replacements; new piping; upgraded hot water, refrigeration and HVAC systems; new fire detection and fire fighting systems; new emergency generators; and new life rafts. MEP does not include any command, control, communications or computer upgrades.

Approximately two to three weeks after all the work items are completed, which is called the end of industrial work date, the ship is re-outfitted for sea and ready to sail away to its homeport.

So far, eight of the 20 110-ft patrol boats have completed MEP, with three boats currently undergoing MEP at the yard. Thanks to efficiencies achieved from prior MEP availabilities and based on detailed after action reports, the average length of time needed for a 110-ft patrol boat to complete MEP has been reduced to nine months from 12 months. The 110-ft patrol boats are scheduled to finish MEP in 2013.

Nine of the 14 210-ft cutters have completed MEP so far, with three cutters currently undergoing MEP at the yard. In 2008, the Coast Guard decided to accelerate the number of 210-ft cutters undergoing MEP to expedite the installation of a small crane known as a Welin-Lambie boat davit that facilitates deployment of over-the-horizon cutter boats. The 210-ft cutters, each of which needs an average of seven months at the yard to complete MEP, are scheduled to finish MEP late next year.

“If you look at the performance metrics calculated by the U.S. Department of Transportation’s Volpe Center, you’ll see MEP gives you a lot of bang for the buck,” King explained. MEP has provided “dramatic improvements” in both the percentage of time a ship is free of major repairs or casualties, and the percentage of time a ship is fully mission capable. According to the Volpe National Transportation Systems Center, both of these percentages essentially doubled for each class of ship between 2006, before MEP availability, and 2008, after MEP availability.

In addition, the Acquisition Directorate and the Engineering and Logistics Directorate are partnering to investigate the potential of replicating MEP for other aging cutter classes, such as the 378-ft Hamilton-class high endurance cutter, the 140-ft Bay-class icebreaking tugs, and the 225-ft Juniper-class and 175-ft Keeper- class buoy tenders. “MEP is a great model for future mid-life refurbishment projects and an efficient way to spend taxpayers’ dollars,” King said. “As MEP winds down for the 110’s, 210’s and 270’s, we’re hoping to slide in in-service cutter sustainment projects for the 378’s, 140’s, 225’s and 175’s in the future, depending on funding.”

McClure and Assistant Commandant for Acquisition Rear Adm. Ronald J. Rábago will talk about the project’s tremendous success when they present a paper entitled “The Coast Guard’s Mission Effectiveness Project – A Readiness Success Story” at the American Society of Naval Engineers’s Fleet Maintenance and Modernization Symposium in San Diego in September.

In addition to the lessons learned and efficiencies achieved, the paper also highlights the successful use of a multi-crewing approach to crew assignments once a cutter begins MEP. This multi-crewing approach means that the original crew returns to the cutter’s homeport for training and then spends at least one patrol on another cutter instead of living and training aboard the cutter while it undergoes MEP.