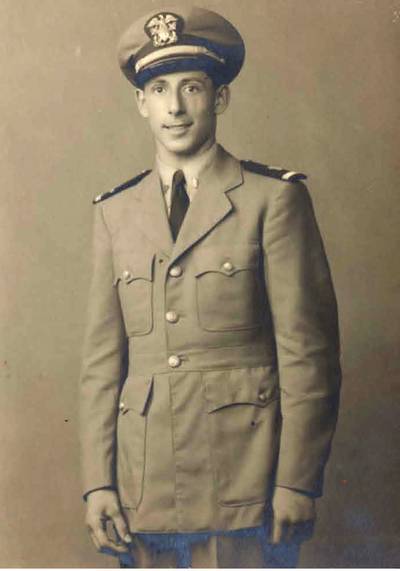 Paul Lieb was among the first Merchant Marines to set foot on the grounds of the Sheepshead Bay Merchant Marine Training Station, when shortly after Pearl Harbor, the U.S. Coast Guard purchased 125 acres of property on the eastern tip of Brooklyn for a huge training center. Seventy-six of those acres were set aside for the Sheepshead Bay Maritime Service Station, now the campus of Kingsborough Community College.
Lieb, who currently resides in Albany, visited the campus with his daughter, Elise Laurenti in 1980, when she joined KCC as an English professor. “When I came here to teach at KCC, I had no idea how remarkable a coincidence it was until my parents’ visit to the campus so they could see how lovely it was,” said Prof. Laurenti. “My father pointed out where the training vessels had docked, and where he had learned to become a seaman. He also gently touched his finger to the names on the bronze plaque of those men who perished and with whom he had trained.”
On a trip this past Memorial Day down memory lane, Lieb shared warm and poignant memories with his family of the three years he spent as a Merchant Marine. At age 17 when he joined the Merchant Marines, he would be among more than 100,000 men who received their training at the station during World War II.
Speaking fondly and with pride of his time at the Marine Training Station, Lieb was steadfast in what dedication meant to him, and to the men served alongside him. “It was about keeping the country safe, keeping the war away from it, and preserving the future of America,” he said. “Everyone had a specific job, and we relied on each other to be safe and successful.”
Training consisted of early morning exercises in very cold weather including the practice of lowering rowboats into the water, classroom exercises, as well as physical training—calisthenics, boxing, and swimming—which they had to be able to do for a certain distance underwater. They also had to jump from a 15-foot tower into water that had been set afire, and learn how to splash their way through into clear water. Raised in a kosher home, Mr. Lieb also had to adjust in other ways as he found himself eating food he had never had before, such as sausage.
After completing training, the Merchant Mariners selected the careers they wanted to pursue; Mr. Lieb became a radio operator, later studying to become a purser/pharmacist so he could find work on ships when he was unable to ship out as a radio operator.
KCC Maritime Technology Program Director Anthony DiLernia appreciates the history that contributed to the war effort. “Many of the wartime cadets went on, after the war, to lifetime careers at sea, as do a number of our current graduates,” said DiLernia. “Among the first things they are taught, much like the Merchant Marines were taught years ago, is that safety and survival at sea are critical elements of training. For training then, cadets jumped off a tower into the water that had been set afire. Today, students must jump off the high board into the pool wearing survival suits, and then swim to and climb into a life raft. The only difference from the old days is that we don’t set the pool on fire.”
Kingsborough’s Maritime Technology program trains men and women for marine related careers ashore and at sea. Graduates work in a variety of shore-side positions including marina managers and service technicians, vessel service and repair, boat retail and wholesale sales, equipment sales and environmental consulting. At-sea positions focus on employment in the “brown water” or near shore industry, including tug and towing, municipal and private ferries, local, state, and federal law enforcement, firefighting, private yacht, dining, and entertainment vessels.
• America • federal law enforcement • Memorial Day