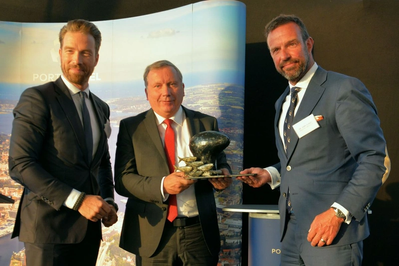 The Federal Government Coordinator for the Maritime Industry, Norbert Brackmann, has been honored with the Port Award 2019.

The prize was presented to him on September 5th on the occasion of the traditional “Sprottenback” event hosted by the companies of Kiel’s maritime industry. In his role as the Chairman of the Advisory Board, Jens B. Knudsen, the Executive Manager of Sartori & Berger, paid tribute to the awardee in his laudatory speech: “Norbert Brackmann campaigns at federal level for competitive conditions in the utilization of on-shore power.

As a result of this, the shipping industry and the ports are getting economic incentives for pursuing efficient climate protection.” Together with the Prime Minister of Schleswig-Holstein and the Lord Mayor of the Capital City, the Federal Government Coordinator for the Maritime Industry had inaugurated the port of Kiel’s first on-shore power supply plant at the Norwegenkai Terminal last May. Port Award winner Norbert Brackmann said: “We want to go on supporting the installation of further on-shore power supply plants and amongst other things, we also want to reduce the EEG levy on shore-side power. As many shipping companies as possible shall use the on-shore power supply in our ports in future.”

Meanwhile, the large cruise ferries of the Color Line shipping company are supplied with on-shore power at the Norwegenkai Terminal on a daily basis. This way, 3,000 tons of the carbon dioxide (CO2) greenhouse gas can be saved per annum during docking times. Furthermore, sulphur, nitrogen oxide and particulate matter emissions are reduced to zero which makes Color Line a pioneer shipping company setting examples in Kiel. Following the successful implementation at the Norwegenkai Terminal, the PORT OF KIEL is about to start constructions of the next on-shore power plant. The Ostseekai Cruise Terminal, which will also supply the Schwedenkai Ferry Terminal with shore-side power, will be equipped in the months to come. Dr Dirk Claus, Managing Director at the PORT OF KIEL (SEEHAFEN KIEL GmbH & Co. KG): “This will be the most powerful on-shore power supply plant on the German coast. From then on, two vessels can be supplied with on-shore eco-power at the same time.”  The beginning of test operations is scheduled for next summer. In the medium term, 60 % of the energy demand by the vessels visiting Kiel is supposed to be met by on-shore power. Kiel’s City President, Hans-Werner Tovar added: “Kiel is a climate protection city and consistently pursues the implementation of the BLUE PORT Concept which has been developed together with the port. This makes us one of the most eco-friendly ports in Europe.”

Port Award winner Norbert Brackmann:
Norbert Brackmann (65) is a Member of the German Bundestag and has been Federal Government Coordinator for the Maritime Industry since April 2018. In this position he coordinates and pools the measures of the Federal Government to strengthen Germany’s international competitive position in the sectors of shipbuilding, maritime transport, port industry and marine technology.

Norbert Brackmann graduated from grammar school in Ratzeburg in 1973 (Lauenburgische Gelehrtenschule). After that, he signed up as a regular soldier at the German Bundeswehr. From 1975 he studied law at the Christian-Albrecht-University in Kiel and passed his first state examination in 1979, followed by the second state examination in law in 1982 after he had completed his legal clerkship. Since 1982, Brackmann worked at the NDR in Hamburg and was Head of the Sound Broadcasting Department from 1985 to 2000. From the year 2000 up to his being elected Member of the German Bundestag in 2009, he managed the New Media Department. Norbert Brackmann is married with two grown-up sons. Since 1975 he has been committed to local politics in the county of Lauenburg and since 1978 he has been Member of the County Council.

Since the elections to the German Bundestag in 2009 Norbert Brackmann has also been working in federal politics. After the latest elections to the German Bundestag in 2017 Brackmann became Member of the Budget Committee again, Chairman of the CDU/CSU parliamentary group in the Budget Committee as well as Rapporteur for the budget of the Federal Ministry of Transport. With the government formation of the grand coalition in 2018 Brackmann was appointed new Federal Government Coordinator for the Maritime Industry and has thus become a member of the cabinet of Angela Merkel.

The Port of Kiel Award 2019:
The sculpture of this year’s Port Award in the shape of a bollard surrounded by sprats, was designed by Patrick Schloßer (ANTARIS), a designer and craftsman of metal art from Eckernförde. The sculpture is a unique piece of metal art which has been elaborately crafted by the artist. The bollard symbolizes the fixed connection between the vessels and the port. The sprats that are always forming a school of fish stand for the community that strives to move forward. On the suggestion of the PORT OF KIEL Advisory Board the annual Port Award is handed over at the “Sprottenback” event to an awardee who has distinguished himself by some meritorious service to the port of Kiel.

"Sprottenback" 2019:
The „Sprottenback“ is the traditional annual event hosted by the companies of Kiel’s maritime industry. About 300 representatives of the maritime industry, administration and politics gather at one table (called “back” in maritime terms) in order to network and eat Kiel’s local fish delicacy: the sprats. This year, the “Sprottenback” event takes place for the 37th time. The event location is the Cruise Terminal in Kiel’s Ostuferhafen. The organizers are the companies of the “Kieler Hafenrunde” (in alphabetical order): Burmann Hafenlogistik, Color Line, DFDS, Hanseatic Marine Service (HMS), Kieler Schrotthandel (KSH), Kai Service Kiel (KSK), PORT OF KIEL, Sartori & Berger, SCA Logistics, Schlepp- und Fährgesellschaft Kiel (SFK), Stena Line and UCA Port Service.