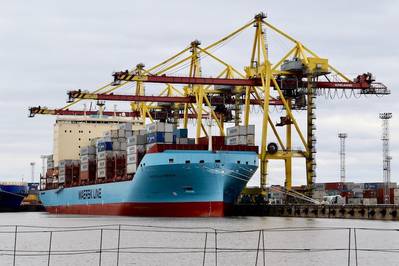 Danish shipping giant A.P. Moller-Maersk will be the first in the world to trial artificial intelligence (AI) powered perception and situational awareness technology on a containership.

Under a deal signed with Boston-based Sea Machines Robotics, Maersk will install computer vision, Light Detection and Ranging (LiDAR) and perception software aboard one of its new-build Winter Palace ice-class containerships.

According to Maersk, its goal is to prove the situational awareness technology aids seafarers, can remove the line of sight restriction from the bridge and provides the infrastructure for a future autonomous collision avoidance system.

“Autonomous vessels are not an end goal for Maersk nor is unmanned vessels; what is more of interest is the technology along the journey and the value it brings,” explained P. Michael A. Rodey, senior innovation manager, A.P. Moller-Maersk. “For this containership situational awareness program, we aim to prove the technology increases our safety, efficiency and reliability.”

“Our team first met Sea Machines around three years ago when they were developing the concepts of their first autonomous systems, and already we were impressed with their technical capability, planned product path and practical understanding of the future needs of the marine market,” Rodey said.

Michael Johnson, founder and CEO, Sea Machines, said, “This partnership with Maersk marks our first foray into the shipping sector and allows us to positively contribute towards the operator’s technology goals. Our mission is to propel the maritime industry forward with 21st century technology and it’s exciting to see the growing demand for Sea Machines products.”

“We are extremely proud that the world’s largest shipping company selected Sea Machines as their advanced perception and autonomous technology provider,” Johnson said.

The collaboration is the latest news in a string of announcements highlighting Sea Machines’ continued progress. The company, which recently opened a location in Hamburg, Germany to support growing demand for engineering, sales and marketing across Europe, is also managing a pilot program with Danish boat builder Tuco Marine to test the autonomous technology aboard ProZero workboats.