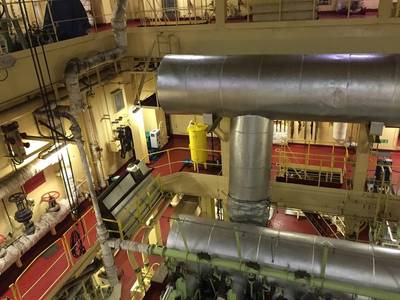 Maersk Fluid Technology (MFT) has reported a recent influx of orders for its SEA-Mate Blending-on-Board (BOB) system as confirmation of industry demand for technological solutions that enable ship operators to blend fit-for-purpose cylinder lubricant compositions on board their vessels that match actual engine operating conditions and fuel sulphur levels.

The use of this type of technology can reduce cylinder oil consumption and alleviate issues such as cold corrosion and excessive cylinder wear, according to MFT. It can also mitigate issues associated with worn system oil causing problems for the hydraulic control system in modern, electronic two-stroke engines.

Developed based on proprietary technology, the SEA-Mate BOB technology allows for the blending of the in-use system oil with a higher BN cylinder oil product to produce a fit-for-purpose cylinder lubricant and facilitate addition of fresh system oil to the engine sump. With BOB units on board 30 - 140 BN cylinder oil can be blended utilizing the in-use system oil as a base-oil, blending it with high-BN or traditional cylinder oils available from the oil majors. The SEA-Mate BOB system has received “no objection” letters from MAN Diesel & Turbo (MDT) and Winterthur Gas & Diesel (WinGD) engines and is suitable for use on all types of vessel, both retrofit and newbuild.

Originally developed by Maersk for use on A.P Moller-Maersk group's fleet of containerships, MFT has since welcomed investment in the technology for installations across a wide range of ship types. To date, more than 200 units have been installed and millions of cylinder operation hours have been logged.

The medium range unit was introduced in 2015 and the first volume order was placed by Maersk Tankers for the retrofit of the SEA-Mate B1000 system for twelve tankers. In 2016, the units were installed on the tankers without the need to interrupt the vessels schedule.

Since the introduction, the SEA-Mate B1000 system has also been adopted for vessels owned by Bertling, Masterbulk and Evergas. For the smaller B500 system, the Clipper group has in 2017 taken delivery of the first unit, to be fitted on a vessel equipped with an MAN Diesel S42MC engine.