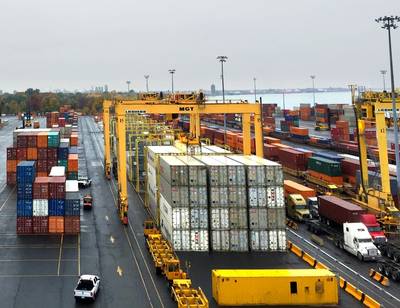 Liebherr Container Cranes have secured an order for the supply of 10 electric rubber tyre gantry cranes to Montreal Gateway Terminal Partnerships. The cranes will be delivered to both the Cast and Racine Terminals in 2019.

Liebherr supplied its first crane to Cast Terminal, Montreal in 1997. Since then Montreal Gateway Terminal Partnership have procured an additional four STS cranes and eight RTG cranes from Liebherr, further cementing their working relationship. In 2016, a conductor bar system was installed at the terminal, and associated electrical and mechanical works retrofitted to two of the earlier delivered Liebherr RTGs to allow for full electric operation. Based on their experience with the Liebherr ERTGs, MGT have contracted Liebherr to deliver a further 10 ERTGs. The electrically operated environmentally friendly machines offer many benefits in terms of reduced noise and emissions whilst allowing MGT to continue to offer its customers an exceptionally efficient and productive service.

The conductor bar connection is the Conductix Wampfler drive in L system, which includes the ProfiDat data transfer medium. This allows for accurate transmission of high data volumes in real-time between the RTGs and the terminal operating system. The machines are also fitted with a diesel generator allowing for operational flexibility and for travel between stacks.

The cranes, which have a safe working load of 40.6 metric tons, can handle six containers plus a truck lane wide while stacking one over five high. The cranes feature Liebherr’s purpose built Liduro heavy-duty crane drive system. LED lighting is used throughout which together with other energy saving technology, reduces electricity consumption. Productivity and safety aids including DGPS, automatic gantry steering and anti-collision systems are included.