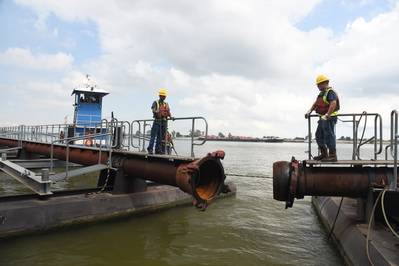 Democratic leaders in Congress said on Thursday they would seek President Donald Trump's support in coming weeks for legislation to invest up to $2 trillion to rebuild U.S. infrastructure, including roads, bridges and schools.

Democrats have been seeking a much larger investment than Trump and fellow Republicans in Congress have suggested.

"Has to be at least $1 trillion, I'd like it to be closer to $2 trillion," Pelosi told reporters at a House Democratic meeting in Leesburg, Virginia. She said there would be discussions on how such an amount could be financed.

Senate Majority Leader Mitch McConnell, a Republican, told reporters later on Thursday that the financing issue was a major obstacle.

"I'm all for taking it (infrastructure legislation) up once the president and Democrats, everybody says: 'OK, here's how we're going to pay for it.' As soon as that magically appears, I think we have a way forward," McConnell said.

Schumer, speaking to reporters outside the U.S. Senate, said a meeting would occur within the next several weeks.

Past bipartisan efforts by Democrats and Trump have brought mixed results. A criminal justice bill was enacted, but an immigration reform effort was a dismal failure, as were border security talks.

"The president calls people and says: 'Why don't we do something?' but then he's unwilling to really do anything beyond his hard-right base and nothing gets done," Schumer complained.

But as Republicans and Democrats gear up for the 2020 presidential and congressional elections, they could be eager to show voters accomplishments.

Deere said: "The president wants a bipartisan infrastructure package that rebuilds crumbling infrastructure, invests in the projects and industries of tomorrow, and promotes permitting efficiency."

Pelosi was dismissive of Trump's plan unveiled in February 2017 designed to encourage spending on improvements by states, localities and private investors. Trump had asked Congress to authorize $200 billion over 10 years to spur a projected $1.5 trillion in projects, but it had no new direct federal spending and never got a vote in Congress.

"We have to put aside any negative attitudes. We are going there with a positive attitude: How much do you want to invest? How do we prioritize, because we want to do school construction, we want to do public housing, there are other things too," Pelosi said.