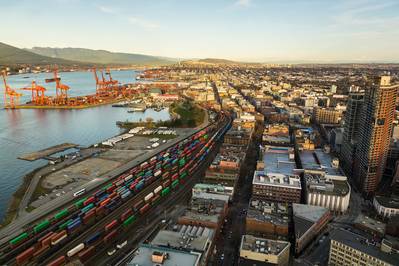 Longshore workers at Canada's biggest port, the Port of Vancouver, were locked out on Thursday in a labor dispute over technology changes, temporarily grinding most shipping there to a halt. The lockout ended in a deal on Thursday with their employer after a few hours, the workers' union said.

A tentative agreement on a new contract was reached with the BC Maritime Employers Association, the International Longshore and Warehouse Union Canada said in a statement.

Jim Thompson, a spokesman for the International Longshore and Warehouse Union Canada, said the lockout had started in at least some work sites at the port and others in British Columbia. He said talks between the union and the B.C. Maritime Employers Association were continuing under federal mediation.

At issue is the employers association's introduction of automation that could eliminate jobs, the union has said. The port is a major gateway to Asia for Canadian goods, moving large volumes of coal, grain, potash and forest products.

Earlier in the day, shippers across the region were concerned."We've got trucks sitting for hours now at the terminals waiting to get in," said Joel Neuheimer, vice president of international trade and transportation at Forest Products Association of Canada, whose members include Canfor Corp and West Fraser Timber.

"We even have vessels saying they won't be stopping, they'll be going to Seattle and other West Coast ports. If you've shipped cargo to Vancouver, it's stranded now."

While all British Columbia ports are affected by the action, Canadian law requires workers to continue loading and unloading grain vessels during labor disputes.

The law does not cover grain stored in unlicensed terminals or containers, said Wade Sobkowich, executive director of the Western Grain Elevator Association, whose members include Richardson International and Cargill Ltd .

"Disruption of any kind will have a major, immediate impact, but could also have longer-lasting effects if confidence in the Canadian supply is diminished," said the leaders of three meat industry groups in a letter on Wednesday to Canadian Labour Minister Patty Hajdu.

Cruise ships are unaffected by the lockout.

The employers association, which represents 55 companies, such as ship owners and terminal operators at the port, issued a notice this week that it would lock out some 6,000 workers who load and unload ships due to a labor dispute.

The union on Monday had started limited workplace actions that it said would still allow normal port operations to continue.

The employers association and Port of Vancouver could not be reached for comment.