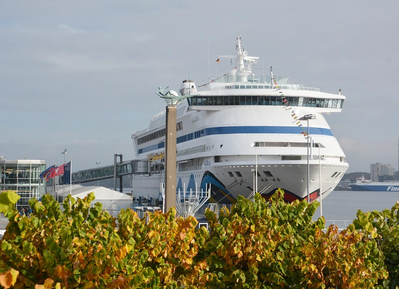 A final call from AIDAvita on October 21 marked the end of the 2017 cruise shipping season in Kiel, Germany.

This year saw the number of passengers embarking or disembarking at Kiel’s cruise shipping terminals pass the half million mark for the first time, as the port was visited on 143 separate occasions by 29 different cruise ships with a combined total 10 million GT.
“Northern Europe cruises are increasingly in demand. We are benefitting from this development and have, this year, posted our highest passenger totals to date,” said Dr. Dirk Claus, Managing Director of the Port of Kiel (SEEHAFEN KIEL GmbH & Co. KG). “In addition to that, we have registered highest ever cruise ship tonnage ever recorded in Kiel.”
MSC Fantasia, weighing in at 138,000 GT, was the largest cruise ship to call the port this season. She alone undertook 21 Baltic and Nordic cruises from Kiel.
Two thirds of all 2017 cruises in Kiel were carried out by shipping companies AIDA, TUI Cruises, MSC and Costa. The most frequent cruise visitors to the fiord this year were the AIDA ships – four of which were stationed in Kiel for the first time.
The latest new ship to join the fleet of TUI Cruises, Mein Schiff 6, introduced herself to the Kiel Fiord this year and began her maiden voyage at the Ostseekai.
During the Kieler Woche sailing regatta between June 17 and 23 no fewer than 16 cruise ships visited the port, among them many international vessels. The ships which headed for Kiel during that regatta – the biggest maritime folk festival and sail sport event  in northern Europe – included ships in service with British shipping companies - like Cunard Line’s Queen Elizabeth, P&O’s Arcadia and Fred Olsen’s Black Watch.
From a port organizational point of view however, attention was focused mainly on seven occasions when three – and even four – oceangoing cruise ships were in port at the same time, in addition to the regular Baltic ferry ships. At each of these peak periods as many as 20,000 passengers were welcomed in Kiel.
In the run-up to the introduction of new regulations governing the on-shore disposal of waste-water from ships, one of the most modern waste-water reception plants ever built went into operation at the Ostseekai in mid June. It can process 300 m³ of waste-water every hour – a tenfold increase on capacities at previous facilities of this kind.
The 2018 season meanwhile will open on April 8 with the arrival of the AIDAcara. The list of registered visits in 2018 will be published by the Port of Kiel at the turn of the year. “In the coming season,” said Dr. Claus, “cruise shipping activity in the port of Kiel will rise even further and for the first time more than 150 visits by cruise ships will be recorded.”
Kiel will next year be the base port for all cruise shipping companies active on the German market; the most frequent callers will ships owned by AIDA, TUI Cruises and MSC.
For the first time, Kiel will be able to welcome the MSC Preziosa, which is to replace her sister ship MSC Fantasia on the Kiel Fiord. Another highlight of the new season will be the introduction of TUI Cruises’ new Mein Schiff 1 which is expected in Kiel on May 19 at the close of her maiden cruise.
To keep abreast of the positive development s on the cruise shipping market long term, construction will begin late summer 2018 on a second terminal building at the Ostseekai. It will go into operation for the 2019 season.
• Cunard Line • Dirk Claus • Elizabeth