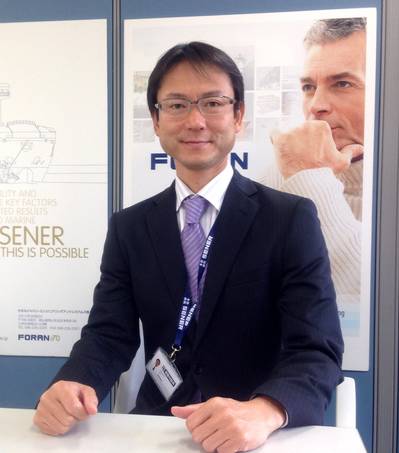 The engineering and technology group SENER has appointed Koji Kawamura as Country Manager for Japan. Koji Kawamura is a professional with wide experience in marine software and in project and business management.

Kawamura assumes this position with the objective of managing SENER office in Japan, mainly focused in the marine activity, both for the number of users of the FORAN System – the CAD/CAM/CAE software developed by SENER for design and production of ships and offshore structures that celebrates its 50 year in 2015 – and for the opportunities in ship engineering projects.

Koji Kawamura holds a degree in Mathematics and Natural Sciences from the Hyogo University of Teacher Education, has completed a Master’s in Project Management and has 10 years of experience in business management and software development in companies specializing in manufacturing. Previously, he has worked in companies such as NTT Data Engineering System Corporation and Hitachi Zosen Information Systems in the shipbuilding business area.

The opening of a SENER office in Japan, located in Okayama, in 2006, was motivated by the marine projects achieved in this country. Today, SENER has signed licensing and service agreements for FORAN with japanese shipyards, classification companies and engineering centers such as Sanoyas, Tsuneishi and Class NK and has also established contacts with universities and technological centers such as the University of Hiroshima and the Nagasaki Institute of Applied Science (NiAS) in order to provide training courses in FORAN and develop research projects.

In parallel with the coordination of shipbuilding projects, Koji Kawamura will be responsible for identifying and pursuing business opportunities in the other three business areas of SENER in the field of Engineering and Construction: Aeroespace, Infrastructures and Transport and Power and Process.