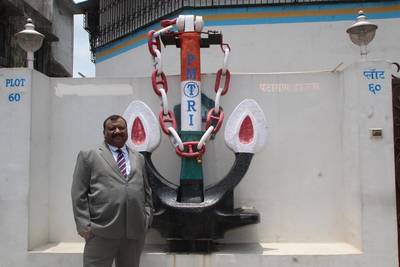 The Maritime Training and Research Foundation (MTRF) in India is unleashing a nationwide roadshow across Indian university cities to ramp up greater awareness of careers within the nation’s merchant navy.
The roadshow will visit cities including Dehradun, Kolkata, Patna, Chennai, Poona and Chandigarh.
It will see free career guidance given to Indian students keen on working as merchant navy officers across various categories aboard specialized cargo ships.
MTRF is promoted by India’s apex shipping trade body - Maritime Association of Shipowners, Shipmanagers and Agents (MASSA).
MTRF Chairman Captain Nalin Pandey said the series of skill development initiatives will promote the nation’s merchant navy as a lucrative career option among young students in one of the world’s fastest emerging nations.
“The proposed road shows, in association with various Indian universities, are aimed at spreading awareness about merchant navy in the country. By 2020, 64pc of India’s population is likely to be under the age bracket 18-30. India will be youngest nation in the world by 2020. It’s our duty to impart skills and generate ample employment opportunities for young Indian students keen on careers in merchant navy.”
MTRF’s initiative aligns with Indian Government’s target to increase the global share of Indian seafarers from its current standing of 7pc to 9pc over next two to three years. Currently, about 1.3 million Indian seafarers serve merchant navy across the globe.
Mr Pandey said: "We also endeavor to constantly upgrade the world-class training infrastructure promoted by MTRF. So far, we have spent and invested over Indian Rs 75 crore to develop the infrastructure at MASSA training institutes located in leading maritime cities of India like Mumbai and Chennai.  These institutes, operated on no-profit-no loss basis, impart world-class maritime courses at highly subsidized costs.
MTRF's move to strengthen its training infrastructure and promote merchant navy as a career option is expected to offer a plethora of employment opportunities to Indian youths.
Growth of India's merchant navy workforce is projected to be phenomenal as over the last decade seaborne trade has grown at twice the global growth rate of 3.3 per cent. According to Indian Shipping Ministry data, cargo traffic at Indian ports has doubled to 1 billion tonne per annum over the last decade and is expected to reach 1.7 billion tonne per annum by 2022.
The country's maritime export-import has been growing at an average rate of 4.5pc year-on-year and accounts for about 95pc of the total import-export trade volume of India. Over the next 10 years, India's maritime export import is anticipated to grow in the range of 5-10pc CAGR.
MASSA has always been instrumental in various initiatives primarily aimed at increasing the population of Indian seafarers. In the recent past, MASSA’s representation to Indian Ministry of Shipping successfully led to the ratification and implementation of an important ILO Convention ‘MLC 2006’ that protects the rights of seafarers.
• Indian government • United Nations

COVID-19: Your LMS Can Help You Now More Than Ever