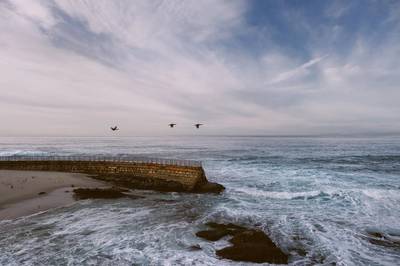 The first comprehensive study of the impact of global sea-level rise on tides has implications for future coastal flood risk, harbour management, and the long term planning of tidal energy sites.

This research, published in Continental Shelf Research by scientists at the National Oceanography Centre (NOC), University of Southampton and Deltares, shows that sea-level rise can significantly alter tides across the world in many different ways in both space and time.
The change will be most pronounced in shelf seas on the east coast of the Americas, northwest Europe, north coast of Russia, across Asia and Australasia.
Professor Kevin Horsburgh, a co-author on the paper from the NOC, said “This research shows that the tides that many people think of as constant can be affected by climate change and sea level rise”
This study was conducted by feeding a range of ‘plausible’ estimates of global sea level rise, considered by the Intergovernmental Panel on Climate Change (IPCC), into a model of global tides. Scenarios ranging up to 10m of sea level rise were tested however the results for 0.5, 1 and 2 meters of sea level rise are of the most societal relevance.
The study also considered the effect of fixed and receding coastlines and the effect of non-uniform patterns of sea level rise associated with melting of the polar ice sheets.
This is also the first study to look at the implications of changing tides for major coastal cities which are most at risk from sea-level rise. In the event of a 2 meter sea level rise, 10 of the 136 global cities analysed will experience a change in the mean high water - the average high tide mark - of greater than twenty centimetres.
The lead author, Dr Mark Pickering, who conducted his research at the NOC, explained, “An increase in the tidal range at the coast matters as it would make coastal flood events more likely to occur.
However, the pattern of changing tides is complex, and in some locations negative changes in tides will decrease flood risk. Changing tides have wide ranging implications from flood risk and tidal renewables to erosion, dredging, and shipping.”
In New Orleans in the United States, the estimated increase in mean high water would make a one in 100 year storm surge around 25% more likely if sea-level rises by one metre and at Dhaka in Bangladesh the same surge 40% more likely.
This risk will increase further when the underlying sea-level rise is taken into account. On the other hand, the results suggest that at Shanghai in China and Ho Chi Minh City in Vietnam comparably large decreases in tides may occur, partially offsetting the flood risk increase associated with the sea-level rise.
These tidal changes will also have implications for existing and proposed tidal renewable energy sites. The proposed Swansea Bay tidal lagoon, for example, may get less energy from the tide in the Bristol Channel if global sea-level rises by two metres.
However the tidal change is not always incremental with the sea-level rise and other studies suggest an increase in tidal energy here under a one meter scenario. This research was funded by the Natural Environmental Research Council (NERC), Deltares and the University of Southampton. It forms part of the NOC’s world-leading research into modelling tides, global sea-level rise, and sea level extremes.
• Americas • Australasia • Bangladesh