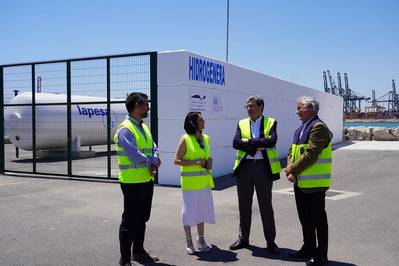 The Port of Valencia has begun the installation of the hydrogen generator with the assembly on the north quay, in the Bracet de la Xità area, of the tank and compressor of the station that will supply hydrogen to the machinery that forms part of the H2Ports project. A further step in this pioneering initiative which will be completed in the next few days with the arrival of the mobile unit with the dispenser to position the Port of Valencia as the first European site to use hydrogen technologies to reduce its environmental impact.

The president of the Port Authority of Valencia (PAV), Aurelio Martinez, stressed that "this is one more step in the different actions that Valenciaport is carrying out to be an area that combines sustainability and growth. For the PAV, the fight against climate change and decarbonization is a priority, as demonstrated by all the projects we are carrying out to meet the objective of being an emission-neutral port by 2030. Our strategy is based on facts such as this hydrogen station which positions us as the first European port to use this technology".

The councilor for Territorial Policy, Public Works and Mobility, Rebeca Torró, stressed that the project is an example of the commitment of the Valencian Community and the Port of Valencia to "develop actions in the logistics and mobility area that will allow us to have an emission-neutral future and attract talent with initiatives that combine sustainability, innovation and clean energy". The councilor stressed the commitment of the Generalitat to "promote the deployment of new technologies and sustainable energy sources applied to industry that place the Valencian economy in a position of competitiveness in a strategic area of the present and future".

The hydrogen station will supply the fuel necessary to guarantee the continuous working cycles of the equipment forming part of the H2Ports project. One of the pieces of equipment, currently in the construction phase, will be the machinery or prototype of the Reach Stacker vehicle or container stacker which will be powered by this energy and which will be tested at MSC Terminal Valencia. The other piece of equipment will be an adaptation of a conventional 4x4 tractor unit, which will have a fuel cell adapted for testing in loading and unloading operations at Valencia Terminal Europa of the Grimaldi Group.

The hydrogen supply station (HRS) has been designed and built by the National Hydrogen Centre, and will include a fixed part that will be dedicated to the reception, storage and compression of hydrogen up to delivery pressure (both already installed at the Bracet de la Xità), and a mobile part that will store the compressed hydrogen and will include a hydrogen dispenser for refueling the port machinery. The HRS will have a two-stage water-cooled piston hydrogen compressor with heat exchangers integrated into the system, two groups of hydrogen storage cylinders at 300 and 450 bar and a dispenser at 350 bar for heavy vehicles. Carburos Metálicos is leading the installation of the hydrogen plant in the Port of Valencia and will manage it during a pilot period of two years, thus guaranteeing the good practices of the equipment involved and the correct handling of the hydrogen loading operations. Likewise, Carburos Metálicos will supply the renewable hydrogen and will develop the necessary logistics for the supply of the port machinery.

The European project which will enable Valencia and its port to work and move port machinery with hydrogen is called "H2PORTS - Implementing Fuel Cells and Hydrogen Technologies in Ports". It is an initiative coordinated by the Valenciaport Foundation in close collaboration with the Port Authority, and is financed by the Clean Hydrogen JU program of the European Union. Its main objective is to test and validate hydrogen technologies on port machinery that will provide applicable and real solutions without affecting the performance and safety of port operations and producing zero local emissions.

Valenciaport is committed to the fight against climate change and decarbonization through different actions. Green hydrogen is one of the lines of work being carried out by the PAV, which has been recognized by the Spanish Government as a benchmark within the framework of the 'Hydrogen Roadmap'. Thus, the PAV is one of the institutions, together with the València City Council, the Generalitat Valenciana and the Universitat Politécnica de València, of the 'Valencia Hydrogen Valley' strategy to coordinate, create synergies and promote research into green hydrogen in the transport and logistics sector in Valencia and its metropolitan area.

In addition, the PAV has signed an alliance with the Hamburg Port Authority (HPA) to generate projects for this clean energy with the support of the programs being implemented by the European Union. Valenciaport is very active in local and regional initiatives that promote this collaboration, but also at European and world level, which is why it is part of the Clean Hydrogen Alliance and the Global Ports Hydrogen Coalition. It has also created an advisory group open to more than 65 members and 30 ports around the world that is working to help develop the hydrogen value chain for ports.

The PAV is developing a series of actions, in coordination with the port community, aimed at the fight against climate change and decarbonization in order to position itself as a green port at the service of the citizens, and to be 20 years ahead of the objective of the European Green Pact. To this end, it has launched projects such as the electrical substations of the Port of Valencia, the location of photovoltaic plants in Valencia or Gandia, the installation of wind energy, the use of alternative fuels such as LNG, the commitment to the railway, the electrical connection of the Port of Sagunto or energy efficiency actions.