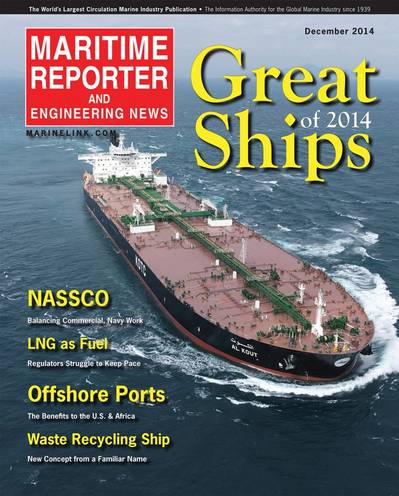 In the culmination of it 75th Anniversary year in 2014, Maritime Reporter & Engineering News is announced the 17 “Great Ships of 2014” in its December 2014 edition, available now at:
http://digitalmagazines.marinelink.com/nwm/MaritimeReporter/201412/

The collection of Great Ships of 2014 is a broad group exhibiting a vast array of the latest ship design and construction, the list distinguished with inclusion of:

-  Pieter Schelte, the biggest ship ever which cost about $3.1 billion and measures 1253 ft. long by 407 ft. wide and built by Daewoo Shipbuilding in Korea for the decommissioning of offshore rigs.

Full details on the 17 Great Ships of 2014 can be found at http://digitalmagazines.marinelink.com/nwm/MaritimeReporter/201412/