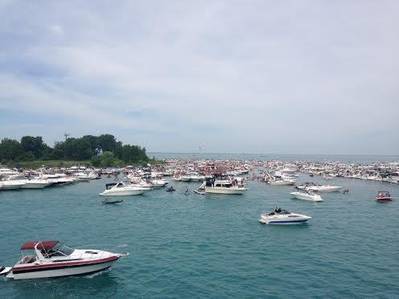 A flotilla of recreational boaters take part in an unsanctioned marine event on Lake Erie during the 2014 Operation Dry Water three-day weekend. The U.S. Coast Guard partners with other maritime law enforcement agencies during this annual campaign to reduce the number of alcohol- and drug-related accidents and fatalities while fostering a visible on-water deterrent. (USCG photo by Capt. Scott Anderson)

U.S. Coast Guard and maritime law enforcement agencies on the Great Lakes and surrounding areas will partner up Friday through Sunday for the seventh annual Operation Dry Water campaign, a nationwide, multiagency effort focusing on boater education and raising awareness that it is unsafe, as well as illegal, to operate a boat under the influence of drugs or alcohol.
“Along with alcohol use, three of the other top five contributing factors in recreational boating deaths are operator inattention, improper lookout and inexperience of the operator,” said Mike Baron, the U.S. Coast Guard 9th District recreational boating safety specialist. “Boat operators are not only responsible for their own boat, but also for the safety of their passengers and the other boats around them.”
Impairment can be even more dangerous for boaters than for drivers, since most boaters have less experience and confidence operating a boat than they do driving a car. Operating a boat with a blood alcohol content of .08 or higher is against federal law and most state laws.
In 2014, participants in the Operation Dry Water campaign removed 318 BUI operators from U.S. waterways and made contact with over 146,700 boaters on 58,670 vessels during the three-day weekend.
"Boater intoxication is especially pervasive during unsanctioned marine events, and impairment often leads to operator inattention, unwillingness to wear a lifejacket, improper lookout and frequent excessive speed, all of which substantially increase the chance of causing fatal boating accidents in congested waterways," said Cmdr. Austin Ives, Coast Guard Sector Detroit chief of response. “Marine events not vetted through public safety channels and approved by local governments or the U.S. Coast Guard greatly increase the danger to recreational and commercial traffic and leave event participants extremely vulnerable to extra and unusual hazards."
Alcohol use continues to be the leading known contributing factor in recreational boating deaths and was identified in 21 percent of recreational boating fatalities in 2014.
"The U.S. Coast Guard has the best trained, best equipped, most professional maritime search and rescue force in the world, but we need your help," said Ives. "Our crews patrol throughout the boating season to find and remove boaters under the influence of alcohol or drugs before they hurt themselves or others. An intoxicated boater is a danger to everyone. Be our eyes and ears and report these individuals as you would a drunk driver."
• federal law • Great Lakes • maritime search