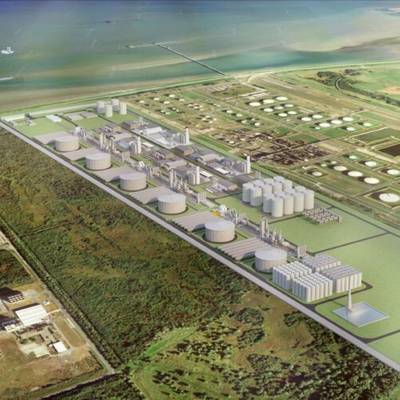 Germany's Tree Energy Solutions (TES), backed by Belgian firm AtlasInvest, said on Wednesday it would accelerate plans for a gas import terminal to be built at the northern German port of Wilhelmshaven in partnership with E.ON.

It said it was bringing the project forward by about two years because of an energy crisis, which has been fueled by Russia's invasion of Ukraine.

The terminal, to be built by 2025, would be used to import liquefied natural gas (LNG) as a transitional energy source while Germany and the rest of Europe seek to cut reliance on Russian supplies amid a shift towards renewable power.

The infrastructure would gradually be adjusted so that by 2027 it would handle imports of methane, which would be made using green techniques rather than fossil fuels.

By 2027, it could handle volumes of 25 terawatt hours (TWh), TES Chief Operational Officer Otto Waterlander said, rising to 10 times that by 2045 with investment of 25 billion euros ($28 billion).

Green methane can be produced from CO2 when it is combined with hydrogen made using renewable power. The methane can be used as a green gas itself or converted back into hydrogen, with any CO2 recaptured, as TES plans to do, in a closed-loop system.

The company will develop a terminal with storage tanks, ship berths and a power plant. German energy firm E.ON will be a commercial partner in helping build a supply chain.

Several initiatives to import LNG and clean gases have gathered momentum in recent weeks as Germany accelerates efforts to shift away from Russian natural gas supplies and speed up its green transition.