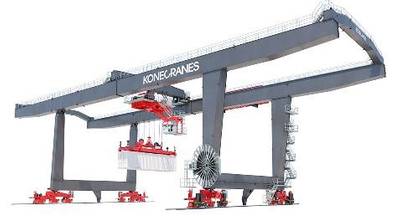 The Georgia Ports Authority (GPA) in the USA has embarked upon the Mason Mega Rail Project that will double the Port of Savannah’s on-dock rail lift capacity to 1 million containers per year. As part of the project, the GPA has ordered 8 Konecranes Boxporter RMG cranes for the expanded intermodal container handling. Delivery will occur in two parts, one in the second half of 2019 and one in the second half of 2020.
Work on the GPA’s Mason Mega Rail Terminal project in Savannah is scheduled to be completed by the end of 2020. This rail terminal will combine and expand upon the rail yards currently operated by CSX and Norfolk Southern railroads at GPA’s Garden City Terminal. The project will also increase the number of working tracks from eight to 18. The terminal will allow 10,000-ft trains to be loaded and unloaded with containers, rapidly increasing service to an arc of inland American markets from Memphis to Chicago.
“The Konecranes RMGs will play an integral role in our rail expansion, allowing the Port of Savannah to handle more containers by rail, with greater efficiency than ever before,” said GPA Executive Director Griff Lynch.
The Konecranes Boxporter RMGs on order will handle containers over double-stacked train carriages. They will serve trains over nine tracks, and load and unload trucks under the cantilever. They will be equipped with Konecranes’ Active Load Control system, which eliminates container sway for maximum container handling productivity. The cranes will also be equipped with an Access Lane Safety System.
• Konecranes • Norfolk Southern • Port of Savannah