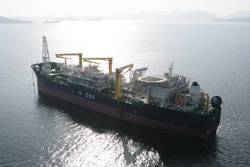 FPSO OSX-1, the first floating production, storage and offloading vessel in OSX’s fleet, has concluded its conversion in Singapore and set sail for Brazil. The journey is estimated to take 40 to 50 days.
The FPSO OSX-1 is commissioned to produce the first oil for itsclient OGX, which is expected to start oil production during the fourth quarter of 2011. Chartered by OGX for a period of 20 years at an average day rate of $263,000, FPSO OSX-1 will be employed in the Waimea accumulation, in the Campos Basin. “Last week, I participated with OSX’s and OGX’s teams in the sail-away ceremony of FPSO OSX-1 in Singapore, symbolizing the official delivery of the unit, which is an important achievement for both companies,” said Carlos Bellot, OSX’s Leasing and Chief Operation Officer.
FPSO OSX-1 was built in Korea, and was customized to meet the technical specifications required by OGX and Brazilian law in the Keppel shipyard, in Singapore, which carried out the construction, modification and upgrade of the modules located on the hull, known as the “topside”. Both shipyards have a strong reputation for carrying out these activities.
“For OSX, receiving the FPSO OSX-1 means the beginning of a routine that will be repeated dozens of times from now on: OSX delivering FPSOs and WHPs for production of oil and gas by our client OGX, and by other companies dedicated to making real the oil discoveries that Brazil has been conquering,” concluded Luiz Eduardo Guimarães Carneiro, OSX’s Chief Executive Officer.
www.osx.com.br/osx-1