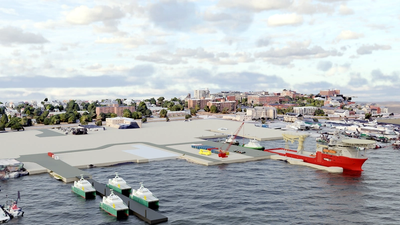 The Port of New Bedford in Massachusetts will add another base of operations and terminal logistics facility to support offshore wind projects off the northeastern coast seaboard.

A groundbreaking ceremony will be held later this year, and the site will undergo redevelopment over the next year and be renamed the New Bedford Foss Marine Terminal. The terminal, slated to open in March 2023, will provide storage and laydown yards for equipment and materials, berth facilities for tug and barge operations, and host crew transfer vessel (CTV) and service operation vessel (SOV) support services. It will create new office space for project teams and a marine coordination center for technicians involved in offshore wind projects.

“Today marks a big day for the Port of New Bedford and the City as a whole,” said Andrew Saunders, a local commercial offshore marine industry attorney with Cannon Street Holdings. He will serve as president of the New Bedford Foss Marine Terminal. “The repurposing of this facility to support offshore wind has been a vision for many and it is great to see this project now begin to materialize.

“This day was the result of a lot of support from the many key local and state government stakeholders as well as industry stakeholders and we would not have gotten to this point without this support. Both Sprague and Eversource also helped greatly in bringing this day to reality.”

“The New Bedford Foss Marine Terminal is perfectly situated to support offshore wind projects on the East Coast,” said Jason Childs, president and CEO of Saltchuk Marine. “We appreciate the vision of the City and Port of New Bedford and the vital role they are playing in making this project a success.”

New Bedford Mayor Jon Mitchell said, “We are thrilled to welcome Foss to the Port of New Bedford. The new terminal will solidify the port’s status as the East Coast’s leader in offshore wind, complement our fishing industry, and create opportunities for our residents.”

“Foss’s investment in New Bedford is a great example of how the emerging offshore wind industry, led by the Vineyard Wind 1 project, can have a meaningful impact on the community,” said Vineyard Wind CEO Klaus Moeller. “The agreement will not only expand Foss’s operations in Massachusetts, but also create opportunities for local residents.”

“We are happy that we supported Foss in its development of this terminal as we believe that this is an example of creating added value in the development of offshore wind along the Northeast US coastline. It shows that cooperation, long term relationships and trust between companies and people creates opportunities for multiple parties and leads to local job creation,” said Jan Klaassen, director of DEME Offshore US.

The seller, Sprague Massachusetts Properties, is wholly owned by Axel Johnson Inc. which is a private operating company with a mission to invest in and help grow great industry-leading businesses over the long term. Until mid-2021, Axel Johnson was the majority owner of Sprague Operating Resources with Sprague utilizing the New Bedford facility as a petroleum marketing location. In the near-term, Sprague will continue to service the New Bedford petroleum market from its nearby Providence, Rhode Island distribution terminals via truck.

“We’re proud of our continued partnership with the City of New Bedford and the work that has already gone into the waterfront site over the past several years,” said Eversource Executive Vice President for Corporate Relations and Sustainability Jim Hunt. “Redeveloping the property will bring environmentally responsible economic development opportunities to the area as our region becomes a leader for offshore wind, which aligns with our work creating a more sustainable future.”