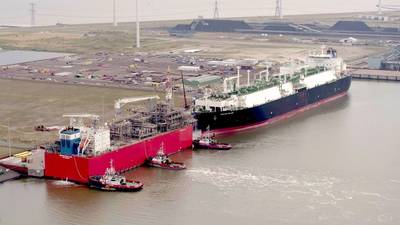 The first ship to bring a cargo of liquefied natural gas (LNG) to a new terminal at the Dutch port of Eemshaven has docked and has started the unloading process, the gas grid operator said on Thursday, part of Europe's bid to cut reliance on Russian gas.

The LNG tanker Murex berthed alongside the regasification unit at the new EemsEnergyTerminal, which can handle 8 billion cubic meters (bcm) of gas a year, a Gasunie spokesperson said.

"Everything is going perfectly," Marie-Lou Gregoire of Gasunie said.

The terminal, near Groningen, has two Floating Storage Regasification Units (FSRUs) that Gasunie leased at the request of the Dutch government.

Capacity has been booked by Shell, France's Engie SA and CEZ of the Czech Republic.

Gas from the terminal is expected to start entering the Dutch grid for the first time next week, although the station will not operate at full capacity until November or December.

The capacity in Eemshaven will complement the larger Gate Terminal in Rotterdam, now operating at 16 bcm capacity and which is planning a further 4 bcm expansion by 2025.