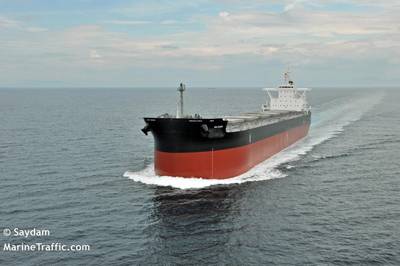 The RB Eden vessel carrying 70,000 tonnes of U.S. sorghum is heading to the Spanish port of Cartagena, Thomson Reuters Eikon ship-tracking data showed, in what will be a fifth cargo of U.S. sorghum to be diverted from China to Spain.

The ship had sailed towards the Spanish Canary Islands after turning around in the Indian Ocean. Having circled off the coast of Tenerife, it changed destination late on Monday to Cartagena in southern Spain, a regular import terminal for livestock feed grain, Eikon data showed.

Traders had been expecting the RB Eden to go on to mainland Spain, like four other U.S. sorghum cargoes bound for Tarragona in northeast Spain, but the final destination had not yet been confirmed.

The RB Eden's cargo would bring the volume of U.S. sorghum to reach Spain to a little more than 300,000 tonnes.

Exporters have been scrambling to divert hundreds of thousands of tonnes of U.S. sorghum bound for China after Beijing announced hefty anti-dumping deposits on the grain in mid-April, part of a simmering trade dispute between the world's two largest economies.