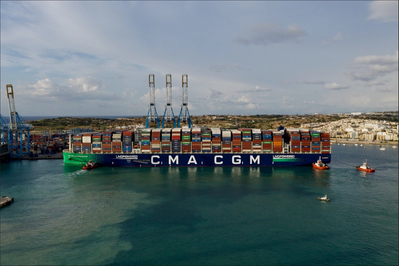 Container shipping group CMA CGM will expand its use of liquified natural gas (LNG) to 26 vessels, it said on Thursday, as part of efforts to reduce pollution in ocean shipping.

After announcing three years ago that it would adopt LNG, French-based CMA CGM has made several orders for gas-powered ships and now plans to have 26 such vessels in service by 2022, it said in a statement.

Seven of the vessels are already in service, including the giant Jacques Saade, named after the family group's founder and which was refueling in Rotterdam on Thursday after its maiden voyage from China, CMA CGM said.

The use of LNG fuel is in response to tougher rules on vessel sulphur emissions that took effect this year. LNG fuel eliminates almost all such emissions.

It also emits less carbon dioxide than traditional fuel oil, though the benefits are more limited and the shipping industry is looking at other solutions such as hydrogen to meet United Nations targets to reduce greenhouse gas emissions from vessels.

CMA CGM, which is the world's fourth-largest container shipping company and operates about 500 ships in total, aims to become carbon neutral by 2050.

It has partnered with French energy group Total for LNG refueling in Rotterdam, Marseille and Singapore.